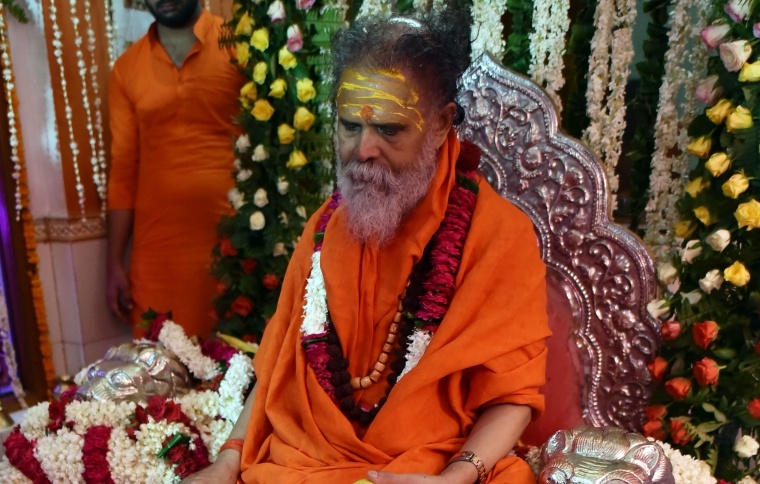 Prayagraj: Mahant Narendra Giri, the chief of the Akhil Bhartiya Akhara Parishad (ABAP), the apex body of 14 akharas, was found dead in Prayagraj on Monday evening.

Giri's body was found dangling from a nylon rope inside a room, the door of which was locked from inside.

Senior police officers rushed to the spot and took custody of the body, which has been sent for post-mortem examination. The police said that, prima facie, it appears to be a case of suicide.

A five-page suicide note in Narendra Giri's writing has been recovered, which mentions that he was mentally disturbed. The seer wrote: "I lived with dignity, will not be able to live with insult: that is why I am taking my own life."

The note also mentions who will be taking care of the ashram, which is seen as the Mahant’s last will and testament. In the note, Giri has held one of his disciples Anand Giri and others responsible for his distress.

Giri was involved in a bitter property dispute with Anand a few months ago. The matter was later resolved, it is claimed.

Anand, meanwhile, has said, “Guruji can't commit suicide, he's been tortured because of money. This is a huge conspiracy against me. An unbiased investigation should be conducted.”

“The land mafia is involved in the conspiracy. I will cooperate with the police in the investigation. Guruji was provoked against me. If I am guilty then I am ready to face punishment. I had spoken to guruji 15 days ago,” added Anand, reports India Today’s news portal.

The media has been barred from entering the Mutt, which is presently under heavy security cover. Hundreds of disciples of Giri have reached the Mutt, but they have been prevented from going inside. The disciples refused to believe that the seer had ended his life and insisted that there was some foul play. Uttar Pradesh: 7 people have succumbed to viral fever in Agra so far in September, says senior...