Uttarakhand Chief Minister Pushkar Singh Dhami has said SIT will be formed to probe the killing of Ankita Bhandari. Dhami in his tweet also mentioned that body of the deceased 19-year-old has been recovered by the police from Chilla Canal.

The CM in his tweet wrote, "In order to get the harshest punishment to the culprits, an SIT has been formed under the leadership of Deputy Inspector General of Police P Renuka Devi and ordered an in-depth investigation of this serious matter."

"Action has also been taken by the bulldozers on the illegally built resort of the accused late last night. It is our resolve that the culprits of this heinous crime will not be spared," the CM added. 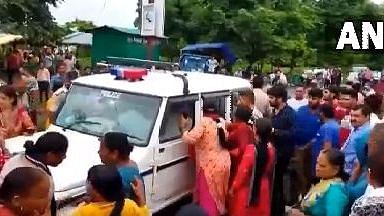 Ankita Bhandari, a receptionist at the Vanantara resort in Lakshman Jhula area, had been missing since September 18. On Friday, September 23, three people including a BJP leader's son were arrested for her killing.

Reportedly, Bhandari was killed by Pulkit Arya, son of former BJP minister Vinod Arya and others after an altercation; they were arrested on Friday.

Locals have been fuming over the incident and staged protests on Friday. On Saturday, they protested against BJP MLA Renu Bisht and vandalised her car. The was escorted away by police. They also vandalised the resort where Ankita used to work at.

The resort is owned by BJP leader Vinod Arya's son Pulkit Arya. Three accused, including Pulkit, have been arrested in connection with the murder case. pic.twitter.com/7Zx0T6HJIB

Ankit Arya, brother of the main accused and Vinod Arya have been suspended from the party and Ankit was also relieved by the Uttarakhand government from the post of Deputy Chairman of the Uttarakhand Other Backward Classes Commission.

Ankita Bhandari murder case | Ankit Arya, the brother of main accused Pulkit Arya and son of BJP leader Vinod Arya, relieved by the Uttarakhand government from the post of Deputy Chairman of the Uttarakhand Other Backward Classes Commission. pic.twitter.com/vZwXHywVNK