Jaipur: A faulty oxygen concentrator claimed the life of a school teacher in Rajasthan's Gangapur city on Saturday. The device exploded when it was turned on. The husband of the deceased lady is in a critical medical condition in a hospital at Jaipur. This is the first case of its kind in the state.

The deceased Santosh Meena and her husband Sultan Singh are residents of Udai Mor locality of Gangapur city. Sultan Singh was suffering from the post-COVID complications. He was being treated in Ajmer and had returned to Gangapur city two weeks ago.

According to police, he was recovering at home and an oxygen concentrator was arranged for him. Singh’s wife Santosh Meena was looking after him.

On Saturday morning when Santosh Meena switched on the lights the oxygen concentrator exploded. It is believed that the machine had leaked oxygen, which ignited and set the entire house ablaze when the switch was turned on.

Neighbours rushed out and found the couple screaming, engulfed in the flames. The two were pulled out of the blaze and taken to a private hospital where they were referred to a government hospital, but Santosh Meena succumbed to her injuries on the way.

Sultan Singh was sent to Jaipur. Their two sons, aged 10 and 12, were at grandfather’s house at the time of the accident, the police informed. An FSL team has taken samples from the spot and police is investigating the matter. 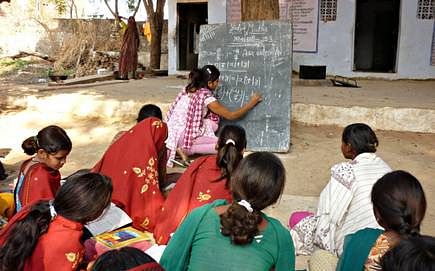