Rajasthan cabinet rejig: In a balancing act, Sachin Pilot loyalists get 5 berths as 15 ministers sworn in 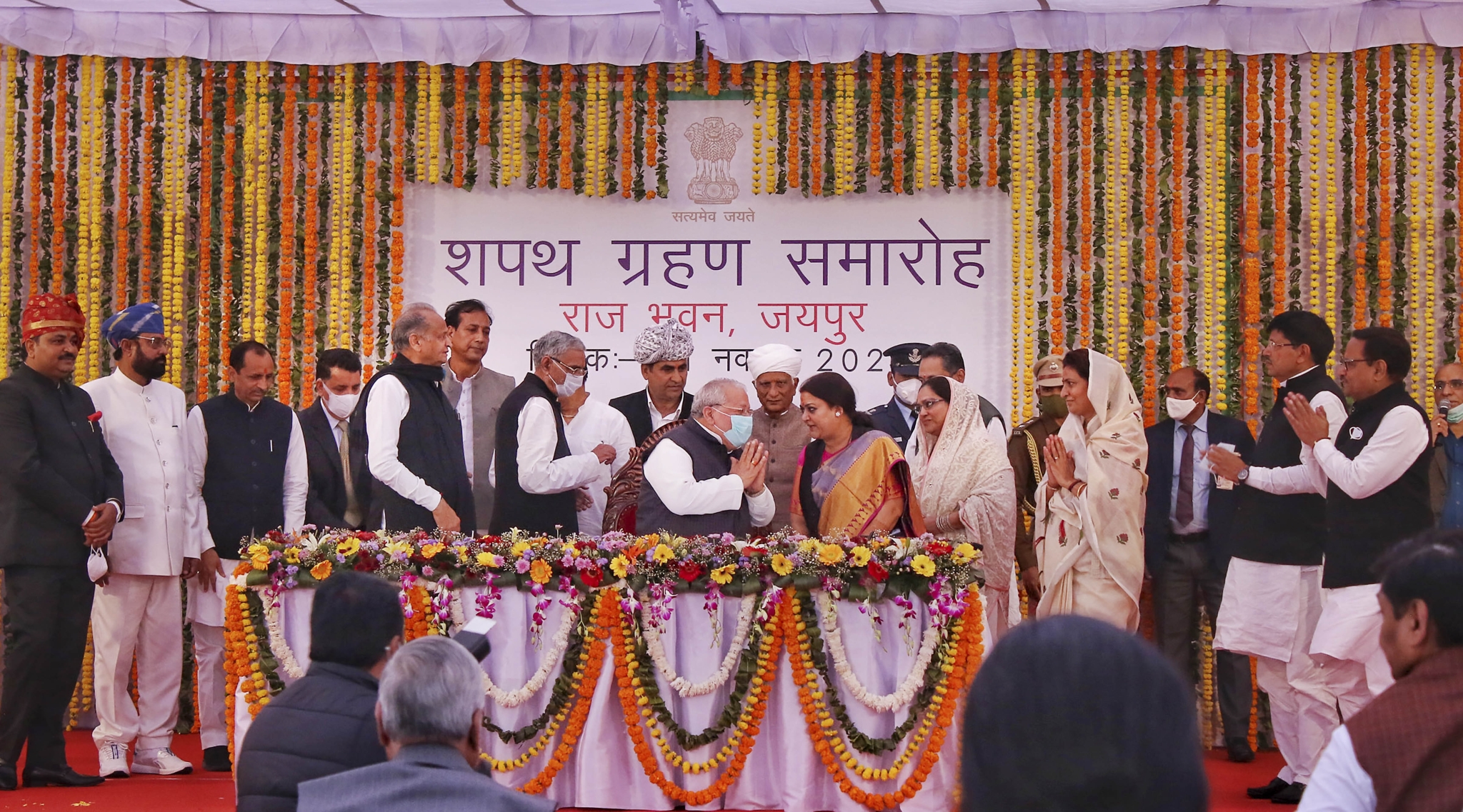 In a balancing act to settle down the internal conflict of Rajasthan Congress, the party has come up with a formula in which the dissident faction of former deputy CM Sachin Pilot got 5 and CM Ashok Gehlot 10 births in the much-awaited cabinet rejig.

Out of 15 ministers to assume offices, 10 are new. 2 have been reinducted and 3 have been promoted from state to cabinet rank. The new team of Gehlot including 11 cabinet and 4 state ministers took oath on Sunday evening in the oath-taking ceremony at governor house in Jaipur. Governor Kalraj Mishra administered the oath of office to the new ministers. The council of ministers in Rajasthan now has 19 cabinet ministers and 10 MoS, apart from the CM.

After a long exercise for this settlement party high command tried to make a balance in not only factions but in participation of different sections and castes though it lacks the regional balance as 7 out of 15 new ministers and 14 out of total 30 ministers are from the eastern Rajasthan.

As far as two top leaders are concerned, CM Ashok Gehlot managed to retain his ministers except 3 who were holding two positions but could not oblige the independents who supported his government at the time of crisis. Whereas Pilot succeeded in getting births for two of his loyalists Vishvendra Singh and Ramesh Meena who were removed from the cabinet after the rebel act last year.

Though nothing has been mentioned about the role of Sachin Pilot in the state, he looked satisfied with the exercise and said, "The step taken by the party after much deliberation is showing good signs. I am glad that by taking cognizance of my words, the shortcomings have been removed." Sachin Pilot thanked everyone and said that the reshuffle has been done taking a very broad view and the decision has been taken after talking to all the sections.

On his role in the party in Rajasthan, Pilot said that he will accept whatever responsibility will be given to him.

Now no vacancies have been left in the Gehlot cabinet after this rejig and it seems that party will go with the same team in the assembly elections to be held after two years from now, though there is a buzz of one more rejig in May next year for that he will have to drop some ministers which would not be easy.

The list of MLAs that have been inducted in the council of ministers suggests that this rejig is dedicated to Congress MLAs only as just one out of six Congress-turned-BSP MLA Rajendra Singh Gudha is on the list.

13 independents supported the government at the time of political crisis last year but none has been given the chance. CM Gehlot acknowledged the support of independent MLAs and said, "Those who could not become ministers have no less roles. Sonia Gandhi ji once said that those who keep patience get rewarded one day."

Though it is being said that a team of advisers to the CM and a good number of parliamentary secretaries will be appointed to accommodate them.

The party tried to balance the caste equations also as for the first time 4 Dalit MLAs will become the ministers while the other major vote bank, the Jat community has also given a sizable representation with 4 ministers in the list. With this, the party has a given massage of solidarity to the farmer community also and tried to take the advantage of repealing farm bills.

Following the announcement made in UP to give a good representation to women, the list has the names of 3 women ministers. Two of them are in the cabinet. BJP, Congress woo tribal community in MP ahead of elections