In December 2021, the Railway Board came out with a detailed circular that will be applicable across India to all those railway stations that are or will be redeveloped. The Outstation passengers will have to pay anywhere between Rs 10 to Rs 50 called ‘Station Development Fee’ depending on the class of coach one is travelling in. This will be in addition to the ticket fare.
Shashank Rao 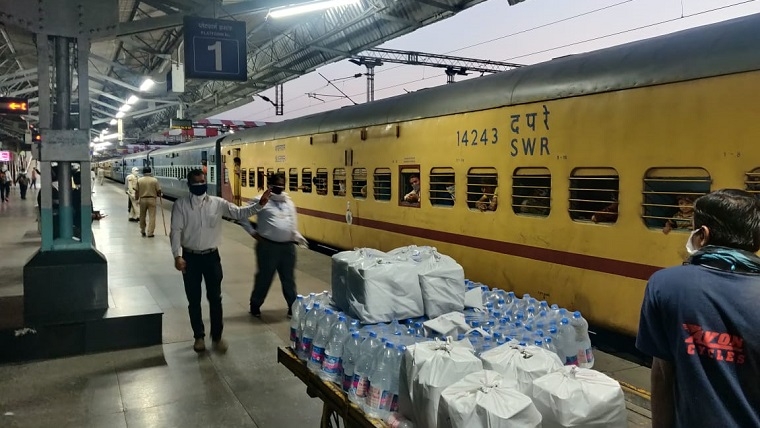 The Indian Railways have levied a ‘station development fee’ that rail travellers will have to pay in case they will board and/or alight at these selected railway stations across India. There are namely two reasons for this additional burden that lakhs of rail travellers will have to pay in the future. First, there are ambitious plans to redevelop 'state-of-the-art' railway stations across the country. And second, to attract private train operators to run long-distance trains, they need these posh high-standard railway stations.

In December 2021, the Railway Board came out with a detailed circular that will be applicable across India to all those railway stations that are or will be redeveloped. The Outstation passengers will have to pay anywhere between Rs 10 to Rs 50 called ‘Station Development Fee’ depending on the class of coach one is travelling in. This will be in addition to the ticket fare.

The fee is namely to recover the cost of development or redevelopment of an existing railway station that shall be provided with high-end state of the art amenities in the near future. As per the letter issued by Railway Board, class-wise station development/ redevelopment fee shall be charged from the passengers. This fee is meant to help the Railways in raising funds and recovering costs incurred on redeveloping more stations.

According to a letter written by Vipul Singhal, Director (Passenger Marketing), Railway Board sent to the General Managers of all zonal railways; passengers buying unreserved train tickets will be asked to pay Rs 10 extra for the use of redeveloped stations. Similarly second class, Sleeper Class, and First class reserved passengers on non-air-conditioned coaches need to pay Rs 25 extra in their train tickets. For air-conditioned reserve class passengers including AC chair car, 3rd AC, AC economy class, 2nd AC, First AC and AC Vistadome, this fee will be charged Rs 50 per passenger.

“This station development fee will be levied only on those passengers who will be boarding and/or alighting at railway stations that will be redeveloped. For those passengers who are taking a break journey for which they will have to change trains; and if one of the arriving or departing stations falls under this category then they will pay for the selected journey only,” explained a railway official.

For the alighting passengers at such stations station developed fee shall be 50 percent of the rates mentioned above. If a passenger board and alights at these redeveloped stations then the station development fee shall be 1.5 times of applicable rate. Confirming the development Rajeev Jain, Additional Director General (public relations), Ministry of Railways said, “As of now it is not being levied. The Station Development Fee will be levied only when the redevelopment work is completed”.

‘Station development fee shall be uniform across all such stations and shall be charged as a separate component plus applicable GST for which instruction shall be issued shortly’, read the letter. Apart from that passengers who buy platforms tickets, will also need to pay extra Rs 10 for the use of developed/redeveloped stations. There is good news for the suburban rail commuters as they will not have to bear this additional surcharge on train tickets or Season Passes.

In total, more than 125 railway stations will undergo a revamp and redevelopment at a cost of over Rs 50000 crore. Some of the railway stations that will undergo revamp in the coming years are at Chhatrapati Shivaji Maharaj Terminus (CSMT), Andheri, Kalyan, Dadar, Thakurli, Kurla LTT, Borivali etc. The Zonal Railways are redeveloping stations which were earlier to be done by Indian Railway Station Development Corporation; that has now been dissolved.

Apart from Mumbai, there are other cities too where this redevelopment is proposed. These include Ghaziabad, Gaya, Gandhinagar, Kanpur, Prayagraj, Jaipur, Udaipur, Kota, Madurai, Ernakulam, Lucknow and Tirupati among many other stations.

In Mumbai, the CSMT is one of the first stations that are under the priority of the rail authorities for redevelopment at a cost of over Rs 1300 crore. The Indian Railways was supposed to lease CSMT for 99 years but now they will hand over the station for 27 years. They have also adopted the Hybrid Annuity Model for funding redevelopment of CSMT station which is likely to replace the PPP model.

As per the new Hybrid Annuity Model, the private contractor will fund 60 percent of the project cost while Indian Railways will pay 40 percent of the cost. The Station Development Fee will be used to fund these revamp of other stations across the country. This would ideally mean that it is the public that will also pay for the revamp and not the government alone.

Then there is the Rail Land Development Authority which is going to redevelop 109 railway stations. These include 9 stations in Uttar Pradesh, 5 in Gujarat, 4 each in Maharashtra, Madhya Pradesh, Punjab, 3 in Jharkhand, 2 each in Tamil Nadu, West Bengal, Rajasthan and 1 station each in Goa, Karnataka, Haryana etc.