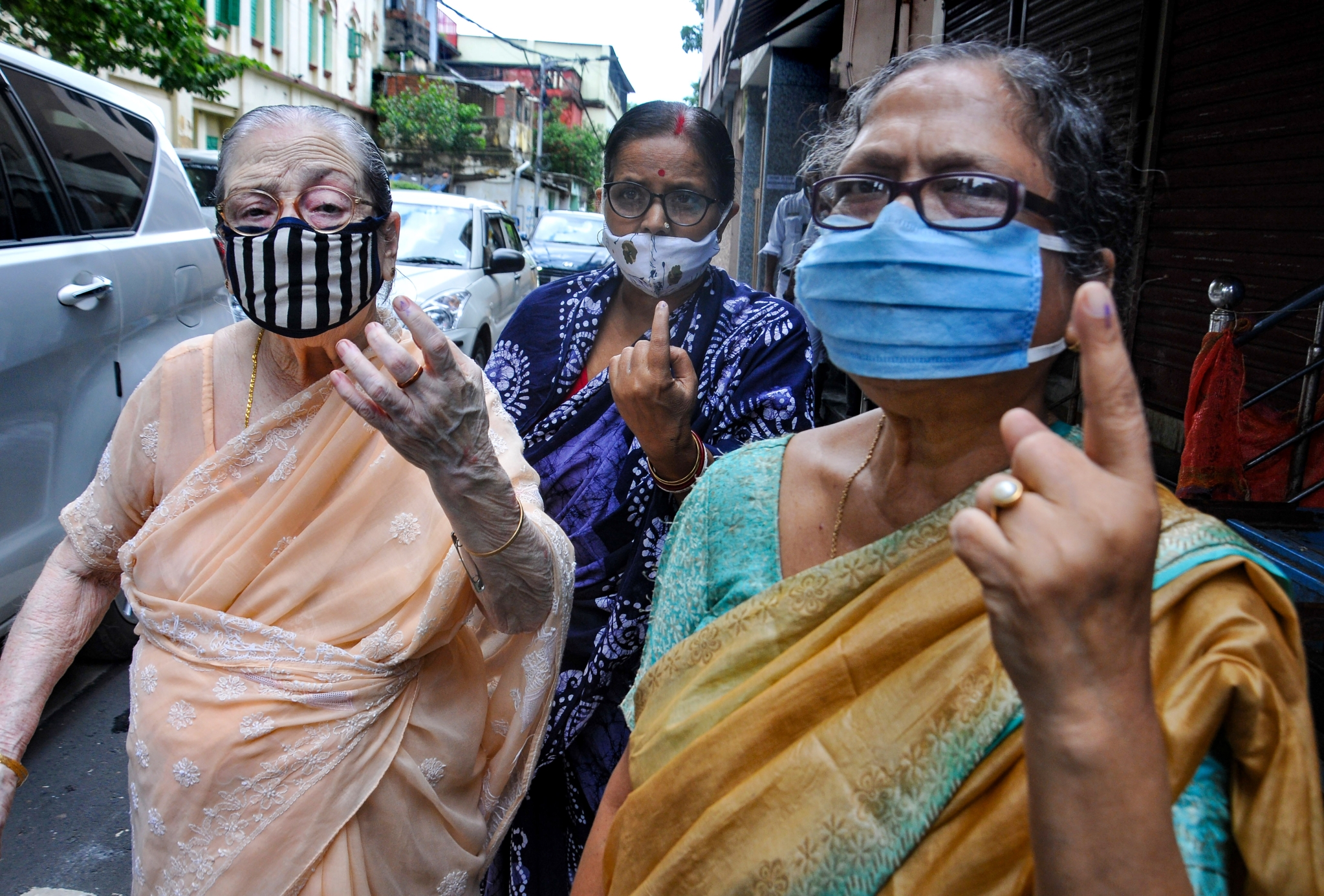 Kolkata: Citizens show their fingers marked with indelible ink after casting their votes during the by-election to the Bhabanipur assembly constituency, where West Bengal Chief Minister Mamata Banerjee is contesting, in Kolkata, Thursday, Sept. 30, 2021. | (PTI Photo)

According to the Election Commission, the poll percentage was 7.5 percent at 9 am that rose to 53.32 percent by 5 pm.

“This time on the contrary the total turnout has reached almost 60 percent. The love and affection of people is there with Mamata didi and the turnout clearly proves it,” said Firhad.

However, amidst peaceful voting, BJP claimed that there were several ‘fake voters’ allegedly sent by the TMC.

Marking many people at several booths, Priyanka alleged that by giving money the TMC is sending such people. A major clash took place at Khalsa High School after a voter of Bansdroni was identified. BJP-TMC slammed each other after Gurmit Singh, TMC’s Hindi cell secretary rescued the alleged fake voters.

“There are several such voters sent by the TMC. Since people are wearing masks all cannot be identified. If the TMC supremo Mamata Banerjee is confident about winning the bypoll then what is the reason for bringing fake voters? TMC leaders Firhad Hakim and Madan Mitra were seen blocking booths,” claimed Priyanka.

According to BJP sources, the saffron camp had complained to the Election Commission but they couldn’t see such a thing in web casting.

BJP leader Kalyan Chaubey was allegedly attacked by motorbike-borne miscreants and his vehicle was vandalized near Booth No 160 at St John’s Diocesan School by alleged TMC goons and a helper of Kalyan got engaged in war of words with TMC’s booth coordinator Asim Bose and police amidst rain had to visit the spot to solve the matter.

The saffron camp also claimed that the TMC did vote rigging at several booths in Bhabanipur and had threatened the BJP’s booth agents.

BJP also alleged that Trinamool leader Sayandeb Chattopadhyay took videos inside the polling booth while casting his vote and had posted them on social media. However, TMC Minister Sobhandeb Chattopadhyay denied such allegations.

The TMC also complained against BJP’s Priyanka Tibrewal for moving in a 20 cars convoy and disturbing the area.

“The whole day the BJP candidate had staged drama. They are building grounds to justify their defeat. Had there been any fake voters, the micro observers, the central forces would have taken cognizance. Time to say goodbye to Priyanka,” claimed Firhad.

Leader of Opposition Suvendu Adhikari took to Twitter and said, “B for Bhabanipur, B for Bansdroni. Party overconfident of victory, engaging in voter fraud. Bansdroni voter in Bhabanipur booth. Scared of defeat, keeping faith in deceit.”

It is pertinent to mention that apart from Bhabanipur, Assembly polls were also held at Murshidabad’s Jangipur and Samsergunj and the voting percentage there were 76.12 and 78.60 respectively.