The village has a ground-mounted solar power plant, and over 1,300 rooftop solar systems with 1kW capacity have been installed on houses to generate electricity.

In a huge announcement with elections in his home State less than two months away, Prime Minister Narendra Modi on Sunday declared Modhera village, famous for the centuries-old Sun Temple, as the country's first 24x7 solar-powered village, stating that this place would also now be known as the first "solar-powered village."

Addressing a mammoth rally at a village near Modhera, Modi said, "We won’t now pay for electricity, but will rather sell and earn from it. It was the government which used to supply electricity to the residents here, now the citizens will produce their own electricity." The Sun Temple in Modhera was built in 1026-27 CE by Chalukya king Bhima I. The monument is under protection by the Archaeological Survey of India and worship is prohibited.

The Prime Minister, who is in Gujarat on a 3-day visit, went on saying, "A new energy of growth has been infused in Modhera (in Mehsana district), and the whole region of north Gujarat. From electricity, and water to road and rail. Many projects related to dairy, skill development and healthcare have been inaugurated and foundation stones have been laid today."

Modhera is at a distance of 25 km from the Mehsana district and nearly 125 km from Ahmedabad city. The village has a ground-mounted solar power plant, and over 1,300 rooftop solar systems with 1kW capacity have been installed on houses to generate electricity.

Both the central and state governments have invested over ₹80 crore in this project in two phases and the State Government allotted 12 hectares for it. The Gujarat government stated in a press release that the village could save 60% to 100% on their electricity bills with this move.

Modi, who began a three-day visit to Gujarat on Sunday, the second in a week’s time, is expected to inaugurate and lay foundation stones of various projects worth over Rs 14,600 crore during his stay. Gujarat goes to the polls in early December. 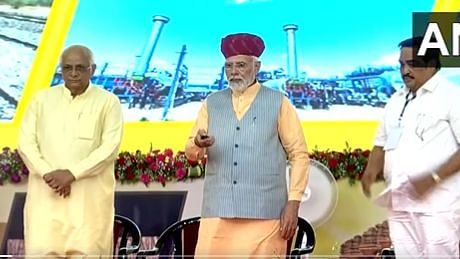