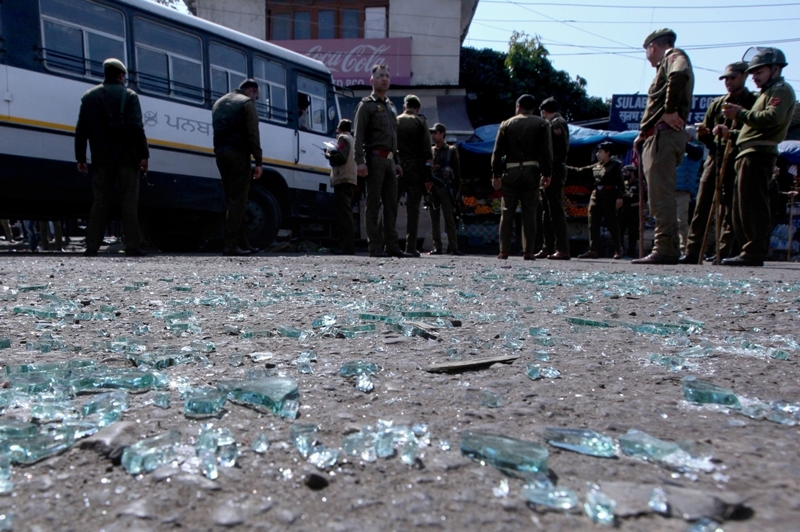 Indian police inspect the site of a grenade blast at a bus station in Jammu. Photo by Rakesh BAKSHI / AFP |

Mohammad Sharik, 17, a resident of Haridwar in Uttarakhand, who was among 33 people brought to the hospital, succumbed to splinter injuries in the chest, the officials said.

The condition of four more injured persons was “critical” and two of them were operated upon by the doctors to save their lives, they said.

The injured included 11 residents of Kashmir, two from Bihar and one each from Chattisgarh and Haryana, the officials said.

The scene of the blast along B C Road was sealed off by police and a massive hunt has been launched to nab the grenade thrower, Sinha, who immediately rushed to the scene to take stock of the situation, told reporters. A parked bus of the state road transport corporation (SRTC) suffered extensive damage in the blast which caused panic among the people.

“Whenever there is heightened state of alert, we strengthen checking and frisking but there is always a possibility of someone slipping through and this one seems to be a case like that,” the IGP said.

The officer said there was no specific input about such an attack in the city.

“General inputs are always there and the deployments have been made.  We are working on the leads all the time whenever we get inputs but there was nothing specific about this,” Sinha said.

“Obviously the intention is always to disturb the communal harmony and peace,” he said and requested the people to maintain calm.

The IGP said the police is collecting the evidence and “we are sure to hunt him down (the attacker).” Immediately after the explosion, people ran to safety and later as the situation returned to normal evacuated the injured to the hospital.

Police parties along with sniffer dogs and forensic experts rushed to the spot and launched a search operation to nab the attacker, the officials said, adding the operation was still going on when last reports were received. However, no one was arrested in connection with the blast so far, they said.

Earlier on December 28-29 last year, suspected terrorists carried out a grenade attack on the bus stand with the intention to target the local police station building, an attack which took place seven months after another grenade attack along the B C Road left two policemen and a civilian injured on May 24, 2018.

“The blast occurred on the roadside when there was huge rush of people. I had come to drop my wife who was going to board a bus to Punjab,” one of the injured, Kuldeep Singh of the Pragwal area of the city, said.

Singh, who is undergoing treatment along with his wife at Government Medical College hospital for injuries, said he felt that somebody hurled something which caused the powerful explosion.