The yatra to the Vaishno Devi shrine atop Trikuta hills in Reasi district of Jammu and Kashmir was temporarily suspended on Friday evening following flash floods triggered by heavy rain, officials said.

Chief Executive Officer of Shri Mata Vaishno Devi Shrine Board Anshul Garg said the situation was under control and there was no report of any casualty or damage.

At least 5 dead in Himachal

Five people were killed and 13 others were feared dead in separate incidents of flash flood and landslide triggered by heavy rains in Himachal Pradesh, officials said on Saturday.

Twenty-two people, who were stranded following a flash flood in the state's Hamirpur district, were evacuated safely, they said.

Chief Minister Jai Ram Thakur expressed condolences over the deaths and said that administration is carrying out rescue operations on war-footing in the affected districts.

The officials said three people died after their house collapsed following a landslide triggered by rainfall in Chamba district. According to Chamba district emergency operation centre (DEOC), the landslide occurred at Banet village in Chowari tehsil around 4.30 am.

A cloudburst hit the Raipur-Kumalda area here in the early hours of Saturday, causing rivers to breach their banks and wash away bridges, officials said.

Water also entered the caves of Tapkeshwar, a famous Shiva temple on the banks of the Tons river, they said.

The cloudburst occurred around 2.15 am. A bridge over the Song river was washed away and the Kempty Falls, a popular tourist spot near Mussoorie, was flowing dangerously, the officials said.

Mud entered homes in over a dozen villages following the cloudburst, prompting the State Disaster Response Force (SDRF) to shift the affected people to safe locations. 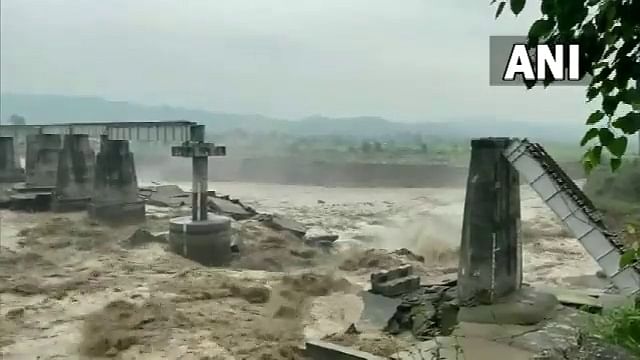