HomeIndiaMorality is fine, but liquor is quicker: Why opening of wine shops amid pandemic raises serious questions

Morality is fine, but liquor is quicker: Why opening of wine shops amid pandemic raises serious questions

Last week, the Union government eased the lockdown imposed on the country. It allowed several types of shops to open. But a startling inclusion was liquor shops. All through the lockdown, they were ordered to be shut like other shops and establishments.

The frenzied rush to the liquor shops was to have been expected. In some areas, police had to clamps a full lockdown once again.

Most states consequently ordered all non-essential shops to remain shut. But liquor shops could remain open, though with the coupon system to prevent crowding.

The order for opening of liquor shops came from the centre. It is quite possible that the central government wanted to ease the financial pains of state governments which had not yet been given their share of the GST money. Or it could have been the lobbying of politicians who are known to benefit from the ill-gotten gains from distilleries as they smuggle out (non-excise-duty paid) liquor. Yes, there is a lot of money at stake (see chart). Either way, the decision to open liquor shops in the midst of a pandemic raises profoundly serious questions on money and morality. Some of them are:

The last question can be elaborated on. Follow the arguments below.

It now becomes clear that what drives governments and even governance is money. See the money states make from the sale of alcohol (we are not calculating money the central government received – like income tax on liquor companies). Moreover, the humongous moolah from liquor could be both official and unofficial, which is why politicians and distillers often become great friends. It also explains why sugar cooperative keep their distillery operations outside the cooperative and run it as a private enterprise.

But what India does instead is to conceal the damage liquor causes (see chart alongside). The government conceals quite well the number of deaths caused by liquor. The only report that gave details about the causes of deaths was taken out of public domain since 2014. But even they don’t give the numbers of people dying on account of liquor consumption.

Similar omissions are death on account of smoking, and death by malnutrition. The latter cause is more serious. The World Health Organisation admits that 30% of the malnutrition cases are from India. Almost everyone believes that 10% of the deaths in India are caused by malnutrition. But there is no mention of it in the MCCD.

Sadly, doctors invariably certify malnutrition deaths as death by natural causes. As a doctor puts it, had the administration allowed doctors to list malnutrition as a cause of death, it would have prompted criminal abetment charges against the collectors and the district magistrates. So, the administration protects itself. Deaths don’t really matter – or so it would appear.

Yes, there are some other figures available. But they do not give the actual numbers of people who die from each disease or cause.

But there are figures available for global deaths (see chart). By extrapolating these figures for different regions, it is now possible to deduce the numbers of people who die in India as well. 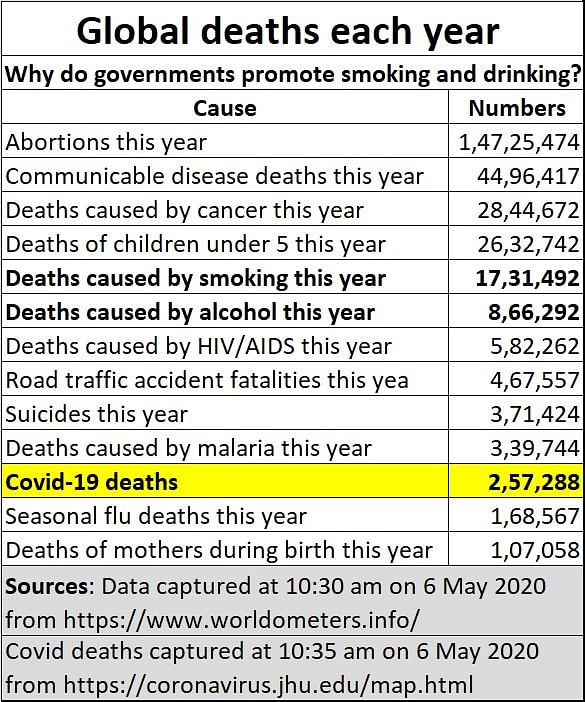 From that table, you can see that death caused by liquor and cigarettes far exceed Covid-19 deaths. There is no reason to believe that this would be not true of India as well.

That raises some other questions.

First, is the lockdown worth the effort? It is destroying jobs (CMIE figures show unemployment climbing from 8% in Feb/March 2020 to over 27% currently), it is hurting industrial activity and crippling the economy. That in turn causes deaths (though the medical cause will never get listed as being the lockdown, or malnutrition or plain hunger). If the objective of the lockdown is to prevent people from dying, surely the need to stop liquor (and cigarette/beedi) sales should assume greater significance. You cannot stop one kind of dying and promote another method where more people die!

Second, if social distancing is required, there are other immensely sensible methods possible.

You could, for instance, allow the opening of even-numbered shops one day and odd number shops the other day. That measure alone would reduce the crowds by half. It would also stop panic buying.

Why now allow for more home deliveries? This includes delivery by e-commerce companies. The best way to reduce crowds is to deliver everything – even liquor – to houses. There will then be no crowds at shops. But liquor companies may not want this, because that would leave an electronic trail of purchases for a product where a substantial quantity is sold on cash basis, without bills and receipts.

Third, why ban e-commerce companies. The government wants people to work from home but prevents them from purchasing computer peripherals online. How does a student do his homework if his hard disk crashes? How does an executive participate in webinars and conferences if he cannot get a Bluetooth headset which is best got online? Is the government worried about the votes from traders over lives lost through sending people scurrying around to the marketplace?

Is it the vote count that made the government go back on its original order of ensuring that all deaths are sent to the electric crematorium? The Muslim business community had already agreed with the authorities that this was a sensible way to deal with the coronavirus threat. Its religious leaders had already communicated this to their followers. Yet, some state governments allowed Muslims to bury their bodies. Do votes matter more than public health?

And why is India using drones only to spy on people? Globally, they are used to monitor crops, to deliver critical products like medicines to locked-down areas, and to deliver critical medicines and food to locked-down areas. Does India only promote snooping and not convenience or common sense? Can’t drones be used to reduce crowding and yet making lives convenient for people?

Why are more burglaries taking place in locked-down business areas? Is it because thieves know which office will remain locked down, and that the theft will not be discovered for some time? Anecdotal versions talk of how, in many cases, FIRs are not lodged because the police requests victims not to file complaints because they are already overburdened and overworked. Home delivery would have eased the pressure on the police and would have made safety and security better administered. And why don’t the police wear protective equipment (PPEs). The list of policemen being infected is also growing.

Past sins begin to haunt

The Covid-19 epidemic has exposed the central government’s growing disregard for deaths, morality and people’s convenience.

The epidemic has also exposed the government’s poor health infrastructure. It could have increased the number of medical education seats in government hospitals – where the crowds are huge. Normally, when lectures are done, the best way medical students learn is by dealing with patients. India has more patients than countries like Ukraine. Yet they go there to study, despite such countries not having enough patients, because India does not offer medical seats at reasonable costs. Government hospitals – with hordes of patients – should logically have increased medical seats by 10-20 times at the very minimum. Instead, governments allowed only politically connected people to make money through private medical schools. That has meant fewer doctors, ill-equipped government hospitals, and more misery for patients.

Covid-19 has exposed the government’s poor spending on education which – in turn -- has prevented migrant workers from learning new skills using the internet or other means.

And it has exposed the politicians love for slum formation in order to get votes. Today, the biggest hotspots for infection are the slums across India. Expect the numbers of dead from such slums to soar even more.

Suddenly, the sins of the past are beginning to haunt politicians from every party. Will they learn? Or will they continue to treat each epidemic as one more crisis that should be forgotten as soon as it is over. Going by past experiences, the latter could be true this time as well. Unless…