Mayawati accuses media of being 'casteist' in its election coverage; bars BSP spokesperson from TV debates

Her outburst came through a series of tweets two days after the BSP slumped to its lowest ever tally of seats in Uttar Pradesh, winning just one in the current state polls

Lucknow: With the BSP still reeling from its worst-ever performance in assembly polls in Uttar Pradesh, party supremo Mayawati Saturday accused the media of adopting "casteist and hateful approach" towards the party, and asked its spokesperson to boycott TV debates.

Her outburst came through a series of tweets two days after the BSP slumped to its lowest ever tally of seats in Uttar Pradesh, winning just one in the current state polls.

She claimed the media adopted a "casteist, hateful and despicable approach" to "harm" the Ambedkarite BSP movement during the Uttar Pradesh assembly polls on the instructions of "their bosses".

"Therefore, all the spokespersons of the party -- Sudheendra Bhadauria, Dharamvir Choudhary, MH Khan, Faizan Khan and Seema Kushwaha -- will no longer participate in TV debates etc," she said in a tweet in Hindi.

At her press conference on Friday, Mayawati alleged that a false narrative was created to pull down the BSP. “The casteist media put out fixed surveys and said negative things about us, which ended up deceiving people, especially Muslims and those against the BJP. A message was put out that the BSP is the BJP’s B-team when in reality the opposite is true because BSP’s fight with the BJP was political, electoral and one based on principles,” she said.

Reduced to a seat and a mere 12.8% of the vote share in the just concluded Assembly elections — the BSP’s worst-ever performance in Uttar Pradesh — party chief Mayawati said the decision by Muslims to throw their lot behind the Samajwadi Party (SP) resulted in Dalits, upper-caste Hindus and OBCs backing the BJP to keep out the SP’s “jungle raj”.

Speaking for the first time since Thursday’s results, Mayawati said, “To defeat the BJP, Muslims shifted their votes from the tried and tested BSP to the SP. This wrong decision of theirs cost us heavily because the fear spread among BSP supporters, the upper-caste Hindus and OBCs that if the SP comes to power, there will be jungle raj once again. So they went to the BJP… This is a harsh lesson for us… that we trusted them… We will keep this experience in mind and change accordingly.” 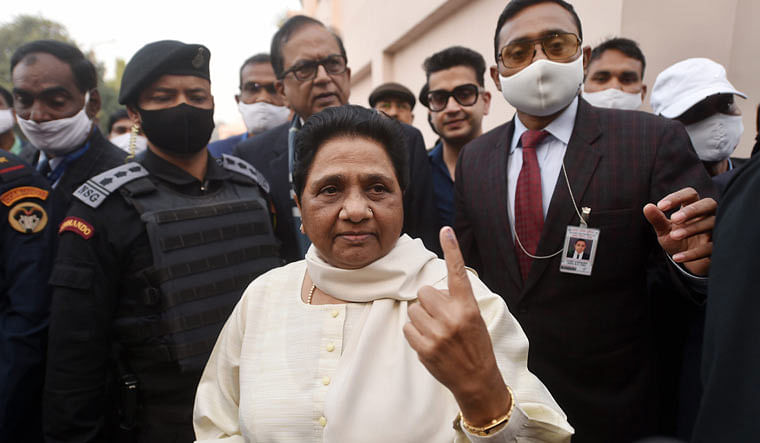 HomeIndiaMayawati accuses media of being 'casteist' in its election coverage; bars BSP spokesperson from TV debates