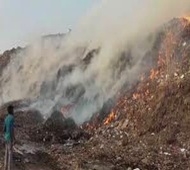 Noida (UP): A man was arrested here on Tuesday for allegedly causing air pollution by burning waste material, police said.

The accused has been identified as Mohammad Qasim, they said.

A resident of a JJ cluster, Qasim was burning waste, including plastic, in Sector 14 here. He was arrested by a police team from Sector 20 station, the police said.

He said the action was taken in compliance with various orders issued by the Supreme Court, the Uttar Pradesh government and the Central Pollution Control Board to curb pollution.

According to Chauhan, a case has been registered against Qasim under the provisions of the Environment Conservation Act, 1986, and further proceedings are underway.