HomeIndiaMaharashtra: Missing woman from Amravati traced, 'FIR only if she complaints' says police

Maharashtra: Missing woman from Amravati traced, 'FIR only if she complaints' says police

BJP leader Shivrai Kulkarni blamed it on being the fifth case of 'love jihad' in the region, while independent MP Navneet Rana lashed out at police officers for recording her phone when she tried to enquire about the case.

MP Navneet Rana had lashed out at a police station over the girl missing out. |

Amravati: A 19-year-old woman who had been missing since Tuesday afternoon from Amravati in Maharashtra, drawing "love jihad" allegations from BJP leaders as well as independent Lok Sabha member Navneet Rana, was traced by police at the Satara railway station on Wednesday night.

As per the report published in the Indian Express, an officer from the Rajapeth police station stated that the police will lodge an FIR only if the woman has any complaint. The identity has been withheld. The officer said, "We sent a message on wireless and roamed around with her brother to find her. We asked him if we could circulate her photos in our circle to find her, but he denied it. We then detained a man known to her and got another lead, which we worked on with help from our cyber police. She was traced to Satara around 11pm on Wednesday. She is being brought back. Police as well as the women's commission will record her statement to find out if she has any compliant."

After the woman left home without informing her parents, they registered a missing complaint at the police station on Tuesday night.

Local BJP workers led by spokesperson Shivrai Kulkarni then accused this of being the fifth case of "love jihad" in the region. MP Rana claimed the woman had been confined by the members of a community.

Rana had created a ruckus at the police station on Wednesday, alleging the police officer had recorded her phone call when she inquired about the investigation.

The accused, who is in his 20s, had already been detained by the police. Rana asked the police to act sternly against the man they had detained. 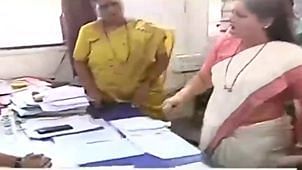