'Lakhimpur Kheri incident cannot be compared with Silger or any other incident': Chhattisgarh CM Bhupesh Baghel 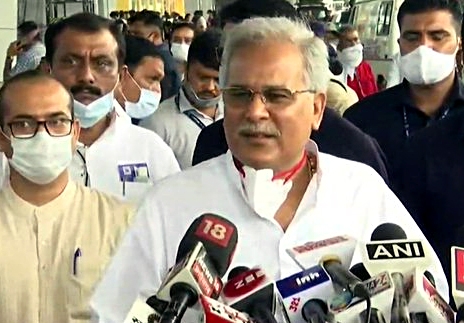 Raipur: Before going for inauguration of world’s first and only one temple made in the name of ‘Mata Kaushalya’(Mother of lord Ram), and Ram Van Gaman Circuit, Chief Minister Bhupesh Baghel interacted with media at his official residence in Raipur on Thursday and said, there is no comparison between Silger or any other incident with Lakhimpur Kheri incident.

It was planned murder, an outcome of ideology through which BJP and its leaders draws inspiration, Baghel alleged. The way the Union State Home Minister’s son’s car mowed down the peaceful farmers, was a display of arrogance, that if you do not start walking on the lines we dictated then you will be perished and killed, CM Baghel said. They manhandled me and our leaders like Priyanka and Rahul to terrify. Till the time culprits were not arrested.

Those who are raising the issue of Silger and others, I want to ask them how many times BJP top leaders and Raman Singh meet the victims of atrocities in Bastar, Baghel questioned.

I and my MLAs met the families of victims of the Silger incident and also invited them to CM house for interaction, where they denied accepting compensation. The BJP leaders were politically motivated and intentionally raking the issue, the CM alleged.

Baghel also warned BJP and made a veiled attack by saying- the culprits of Kawardha violence will be also paraded before the public soon.

Notably, police arrested around 60 men under suspicion of involvement in the violence which started on Sunday took communal colour in Kawardha over flag hoisting.

Lord Ram can be seen in vivid forms; some see him as an ideology to garner votes, but we in Congress see Ram as a God for oppressed and unprivileged class, farmers, weaker section who provides peace in justice. We see him from the perspective of Sant Kabir, Mahatma Gandhi also as Bhancha (nephew) Ram, the CM said.

He is a guide to attain true spirituality and become a better human but for some it is a ladder for power, said Chief Minister Bhupesh Baghel.