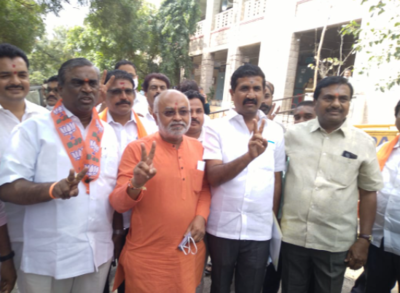 The BJP has taken an unassailable lead in 12 seats and the Congress in 11 even as the counting of votes for 26 seats in the Karnataka Vidhana Parishad (Legislative Council) is underway.

Despite its good performance, the BJP is likely to fall short of a simple majority in the Council.

The results of the polls will have a bearing on the power equation in the Upper House of the State Legislature which the BJP was keen to wrest. The results are also regarded as a precursor to the state Assembly elections coming up in 2023.

The BJP faced an embarrassment in Belagavi where Lakhan Jarkiholi, an independent candidate pushed the saffron party to the third position in the constituency. He is the brother of BJP leader Ramesh Jarkiholi who is upset with the party.

Opposition leader Siddaramaiah said Ramesh was responsible for the BJP candidate's defeat and loss of face in Belagavi.

The Election Commission is yet to make an official announcement on the results. The BJP, which has 26 members in the Council, will have the strength of 38 if the victory in 12 seats is confirmed and will be the single largest party in the House. The party is likely to elect its candidate as the Chairman of the Upper House. After Punjab and Goa, Kejriwal promises Rs 1,000 per month deposit to all women if AAP wins in...