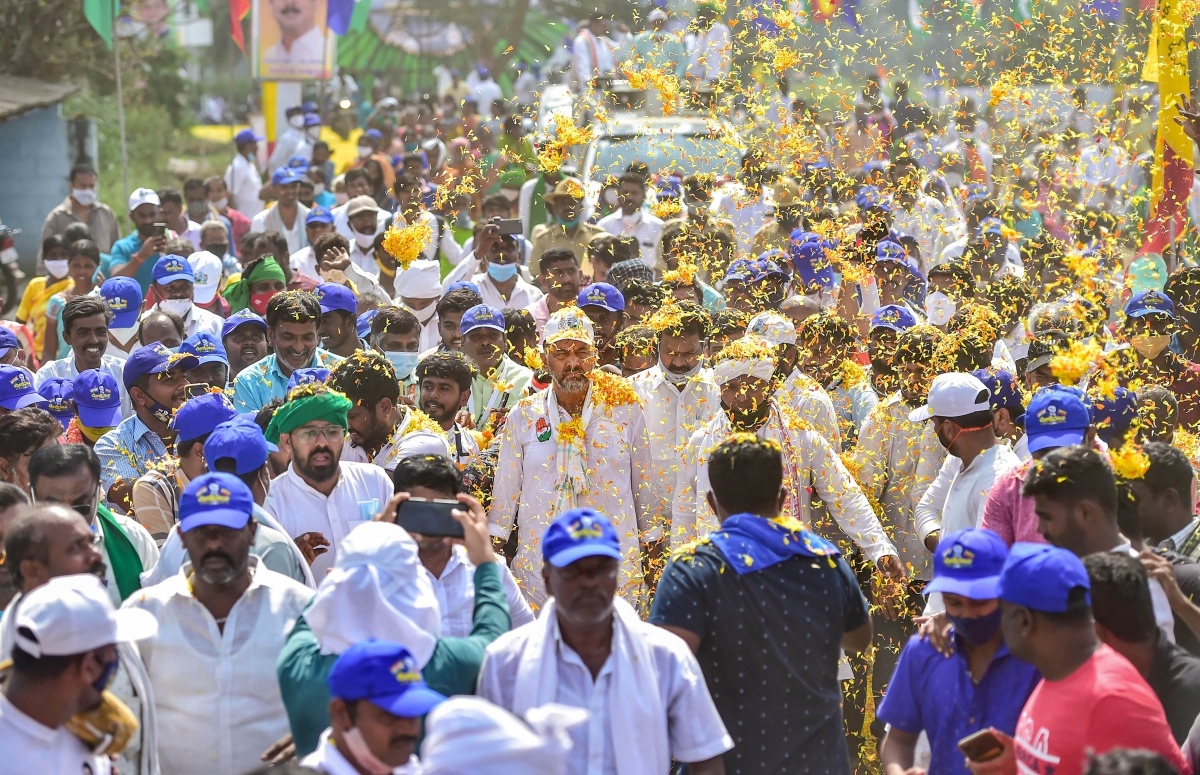 Supporters shower flower petals on KPCC President D K Shivakumar as he walks with party workers, during the 2nd day of the 10-day padayatra from Mekedatu to Bengaluru to demand the implemention of Mekedatu project, in Dodda Alahalli near Bengaluru, Monday, Jan. 10, 2022 | Shailendra Bhojak

Bengaluru: The Congress in Karnataka scored a win when it exposed how weak the BJP’s political spine is when it comes to challenging the GoP. Despite brandishing a sword dripping with Covid lockdown threat at Congress state president DK Shivakumar’s nose, Chief Minister Basavaraj Bommai was quick to sheath it on seeing over 20,000 Congress workers defying weekend curfew at the start of a 10-day padayatra demanding the implementation of a dam project that would ease the drinking water crisis in Bengaluru.

The BJP government had threatened to invoke the Epidemics Act and arrest those who defied the weekend lockdown. The government’s stand appeared so firm that even the organisers of the padayatra were prompted to change the strategy. DKS had stated that only Congress legislature party leader Siddaramaiah and he would walk the first stretch of 15km on the first day to avoid crowding. Even Ramanagar superintendent of police S Girish had said police would not allow the inaugural event.

But on Sunday morning they were surprised to see over 20,000 workers as the padayatra commenced. The government and the police stood on the sidelines as meek spectators not wanting to give the Congress a political handle as the dam project involved supply of water and electricity.

In the coming day, the Congress plans to inject a booster dose of adrenaline into the veins of upbeat Congress workers to make the padayatra larger and more embarrassing for Bommai.

The controversial Mekedatu padayatra had seen a week-long political slugfest between Congress and BJP, but at the end, the BJP had to buckle down as the GoP cleverly coloured the event as ‘apolitical’ around the slogan ‘Namma Neeru, Namma Hakku’ (our water, our right).

Despite its apolitical nature, the padayatra will cover 60 key assembly constituencies and culminate at a public rally in Bengaluru Jan 19.

“The government wanted to scuttle the padayatra through the weekend curfew. They should realise they can never stop us. Likewise, the walk-for-water cannot be stopped,” Shivakumar said.

“It looked like the government did nothing to stop the event given the sensitivity of the issue, as it involved drinking water and electricity projects. We had dared them to arrest us, but they did not, for obvious reasons,” said Bengaluru Rural MP and Shivakumar’s brother DK Suresh.

After a lot of dilly-dallying, the government Monday put up a weak response by booking DKS, Siddaramaiah and other top party leaders for violating weekend curfew. Others named as accused are Leader of Opposition in Rajya Sabha Malikarjun Kharge, former KPCC president G Parameshwara, Members of Parliament DK Suresh and BK Hariprasad, and senior MLA Eshwar Khandre, among others.

Bommai described the march as “a political gimmick”. “With assembly elections approaching, the Congress has woken up to launch a padayatra. We have seen what the party did after holding the padayatra to the Krishna basin in 2013. You can fool people once, but not all the time,” he said.

But there is hardly anyone to take Bommai seriously even as he faces criticism within the BJP for failing to puff up even the little political muscle that he has.

The elected representatives from Bengaluru reportedly prevailed upon the government that any tough action against the padayatra would result in huge loss of political dividends for the BJP as the main beneficiary of the Mekedatu project, once implemented, will be Bengaluru.

Meanwhile, experts say that by turning a blind eye to the health concerns, the government appears to have given an opportunity for the pandemic situation to worsen as the infection rate is peaking with daily cases crossing 12,000 Sunday. Bengaluru has a test positivity rate of 10.3% and people from the city had visited Mekedatu in hordes which may result in a spike of Ramanagar district TPR which is hovering around 1.8%.