Moitra’s party, the Trinamool Congress, had on Tuesday distanced itself from the comments

KOLKATA: Trinamool Congress leader Mahua Moitra’s troubles seem to be mounting by the day with the Madhya Pradesh Police on Wednesday registering a case against her for controversial remarks on Goddess Kali which had allegedly hurt religious sensibilities.

Sounding defiant – which detractors shrugged off as bravado – Moitra dared the saffron party, asking it to ‘‘bring on its goons and trolls.’’

She also asserted that “truth doesn't need back up forces”.

"Jai Ma Kali, the goddess Bengalis worship is fearless & non-appeasing," she tweeted. She further said that people should visit Tarapith to see what food and drink is offered to the deity.

“To all you Sanghis -- lying will NOT make you better Hindus. I NEVER backed any film or poster or mentioned the word smoking. Suggest you visit my Maa Kali in Tarapith to see what food & drink is offered as bhog. Joy Ma Tara.”

The MP had said at a conclave in Kolkata that she had every right as an individual to imagine Goddess Kali as a "meat-eating and alcohol-accepting goddess" as every person has the right to worship God in his own way. The TMC MP had given her response to a film poster that showed a woman dressed a Goddess Kali smoking a cigarette and holding a pride flag

The Bengal BJP leadership, too, has sought Moitra’s arrest; the party said it would move the court if no police action was initiated against her in 10 days. "According to the norms of the Sanatan Hindu dharma, Goddess Kali is never worshipped as a goddess who consumes alcohol and meat. Hindus have been revering Goddess Kali for ages as a symbol of power against evil. Her comments have hurt religious sentiments. We demand her arrest,’’ BJP state president Sukanta Majumdar said.

Moitra stirred up a hornet's nest days after now-suspended BJP leader Nupur Sharma created a controversy with her remarks on Prophet Mohammad, which triggered protests across the country.

The Kolkata Police has summoned Sharma in connection with the comment.

Moitra’s party, the Trinamool Congress, had on Tuesday distanced itself from the comments. TMC sources said Moitra, in turn, had stopped following the party's official Twitter handle.

She was, however, still following West Bengal Chief Minister Mamata Banerjee on the social networking site.

Meanwhile, Congress MP Shashi Tharoor on Wednesday came out in support of Moitra, stating that "our forms of worship vary widely across the country." He also urged people to "lighten up and leave religion to individuals to practice privately." 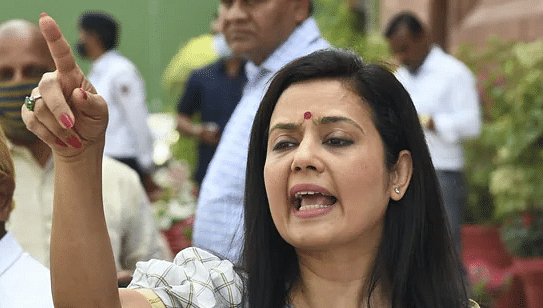