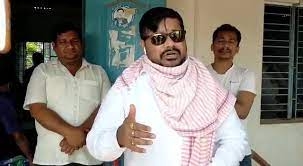 Tripura: Amidst TMC’s new slogan ‘Jitbe Tripura’ (Tripura will win), BJP Tripura MLA Susanta Chowdhury on Monday claimed that the TMC is forcibly trying to disrupt the peace of Tripura by visiting the state and by chanting violent slogans against BJP.

Playing an audio clip where the TMC cadres were heard violent anti-BJP slogans, Susanta claimed just like West Bengal the TMC is trying to create unnecessary tension in Tripura.

“No states have seen post-poll violence but only in West Bengal violence under TMC is still going on. Almost 3010 BJP workers are under threat and so far 40 workers have been killed. They are trying to do the same in Tripura and disrupt the harmony of the place,” said Susanta.

Claiming that the people of Tripura is also surprised that why is TMC trying to make inroads in Tripura, the BJP MLA said that TMC has been trying to get involved in politics of Tripura since 1998. “Since 1998 the TMC is trying to enter Tripura politics. In BJP’s fight against the CPI (M), TMC didn’t support but when TMC wanted the mark of being promoted as a national party then TMC befooled people of Tripura to get six percent vote and become All India Trinamool Congress,” slammed the BJP MLA.

“The NHRC which is working on behalf of the BJP should visit Tripura and see the violence here as even the media is being heckled here. West Bengal is a very peaceful state. If people of WB can witness the developments dome by Mamata Banerjee even the people of Tripura should get a chance to see the same,” said Kunal adding that despite promising jobs to teachers the BJP didn’t keep their promise that lead to suicide.