The tumour weighed 8.5 kilos and had grown to a life-threatening size of 15.7 inches, over two decades. The patient had visited multiple hospitals, but all of them refused treatment owing to the size of the tumour and the risk involved in the surgery.
ANI 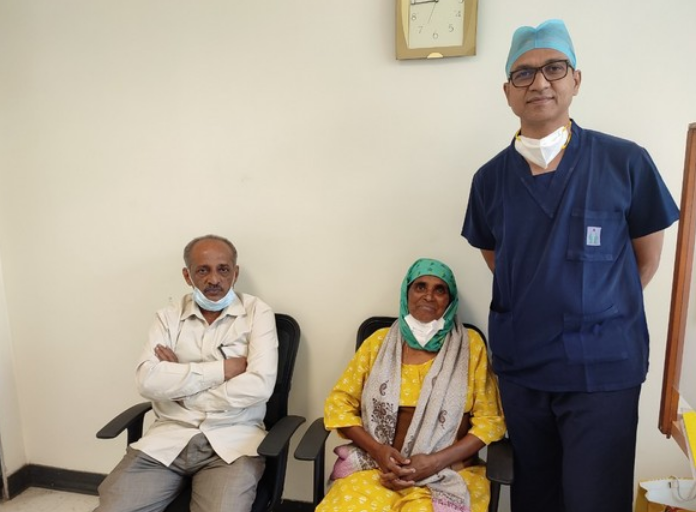 A hospital in Rajasthan' Jaipur performed an eight-hour-long surgery to remove a 20-year-old tumour weighing 8.5 Kg from the liver of a 54-year-old female patient, the hospital said on Wednesday.

"The tumour weighed 8.5 kilos and had grown to a life-threatening size of 15.7 inches, over two decades. The patient had visited multiple hospitals, but all of them refused treatment owing to the size of the tumour and the risk involved in the surgery. A multi-disciplinary approach was adopted to remove the tumour from the liver," read a statement issued by Fortis Escorts Hospital, Jaipur.

Elaborating on the case, Dr Sundeep Jain, Director, Department of Gastro Surgery, Fortis Escorts Hospital, Jaipur said, "The biopsy results revealed that the patient was suffering from a very rare type of tumour- a mammary type myofibroblastoma in the liver. After a careful medical evaluation, we decided that the tumour would be removed surgically. It was a challenging case as the tumour was massive in size and located in the central part of the liver.

He further said, "There were a lot of risks involved during the operation as removing the tumour was itself a challenge. While operating, we also had to save the blood vessels (supply blood to both sides of the liver). It took us 8 hours to remove the tumour. The postoperative period was smooth and uneventful. The patient was discharged after 11 days of hospital stay."

The patient who underwent the surgery said, "I am relieved from the pain which I had been facing for the past 20 years. I had visited multiple hospitals and had lost all hopes as many hospitals had refused to treat me. The tumour grew over the years posing a risk to my health. Finally, I am thankful to the doctors at Fortis Hospital for giving me a new life. By successful removal of the tumour."

"Congratulations to the doctor's team, in achieving another clinical milestone by giving a new lease of life to the patient. This was a rare case and the risk involved in the surgery was challenging. At Fortis Jaipur, we aim to provide patient care with the latest technology. Fortis Jaipur specializes in gastroenterology treatment backed by a team of expert doctors," said Neerav Bansal, Zonal Director, Fortis Escorts Hospital, Jaipur, said.