The group included former US Secretaries of State Henry Kissinger, Condoleezza Rice (who denied Modi a visa to the US), former US Secretary of Defence Robert Gates and former PMs John Howard and Tony Blair.
FPJ Web Desk 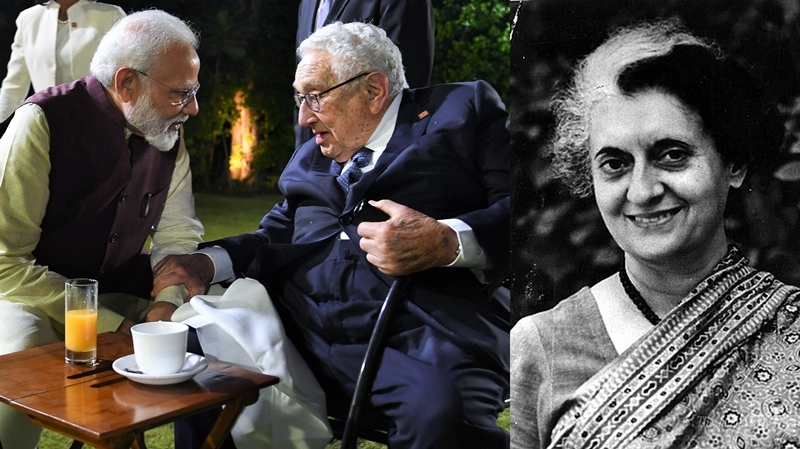 PM Modi recently met a group of influential world leaders as a part of his rendezvous with denizens of the JP Morgan International Council.

To say Kissinger was one of India’s biggest detractors wouldn’t be an understatement and yet he begrudgingly admitted that he had deep respect for Indira Gandhi, and her commitment to the Indian cause.

Of all Indian PMs, no other leader had shown the Americans their place like Indira Gandhi. This was reflected in the deep hatred that Nixon and his advisor Kissinger had for Indira Gandhi.

Kissinger – who recently met PM Modi – had called Indira Gandhi a ‘b***h’ and Indians ‘bast*****’ shortly before the 1971 India-Pak War which saw the liberation of Bangladesh.

Declassified documents showed Nixon and Kissinger use the most unparliamentary terms for Indira Gandhi and Indians. At that time, America were a staunch ally of the Pakistanis, opposed an independent Bangladesh and were oblivious to the massacre of innocents by Pakistani troops.

Years later in 2005, Kissinger apologised deeply for his remarks. He told NDTV: "[The foul language has] to be seen in the context of a cold war atmosphere 35 years ago, when I had paid a secret visit to China when President Nixon had not yet been there and India had made a kind of an alliance with the Soviet Union.”

Kissinger would show begrudging respect for Indira Gandhi in his memoirs.

He wrote: “Mrs Gandhi, who was as formidable as she was condescending, had no illusions about what Nixon was up to. She faced her own conflicting pressures.

Her Parliament would be meeting in two weeks, thirsting for blood. Though she had contributed no little to the crisis atmosphere, by now it had its own momentum, which, if she did not master it, might overwhelm her.”

Praising her personality, he said that he admired her ‘relentlessly pursuing India’s national interest with single-mindedness and finesse and respected her strength even when they were hurtful to US national interest’.

How Indira outwitted Nixon and Kissinger

Indira Gandhi was quite clear that India shouldn’t be seen as an aggressor in the 1971 War. It was ag godsend on December 3, 1971, the Pakistani Air Force bombed nine Indian air bases, Indira Gandhi finally got a go-ahead. She met Opp leaders and told the nation that ‘war had been forced on us’.

She told Parliament: “For over nine months the military regime of West Pakistan has barbarously trampled upon freedom and basic human rights in Bangladesh. The army of occupation has committed heinous crimes unmatched for their vindictive ferocity.

Many millions have been uprooted, ten million have been pushed into our country. We repeatedly drew the attention of the world to this annihilation of a whole people, to this menace to our security.

Everywhere the people showed sympathy and understanding for the economic and other burdens and danger to India. But governments seemed morally and politically paralysed…”

India retaliated with a multi-pronged assault on Dhaka and two days later she declared Bangladesh an independent nation.

It wasn’t just a military victory but a foreign policy coup, and it was also a message to the world that a new India had arrived. It also showed a stunning appreciation of realpolitik from an Indian premier hitherto unseen, particularly in contrast to Nehru’s ‘Non-Aligned Movement’.

As Kissinger himself wrote in his memoirs admitting that Indira outwitted them: “Nixon had no time for Mrs Gandhi's condescending manner... he suspected that in pursuit of her purposes she had in fact fewer scruples than he.”