Interestingly, all her paintings, whether done on canvas or glass, are of only one theme- infant Krishna with his butter pot
PTI 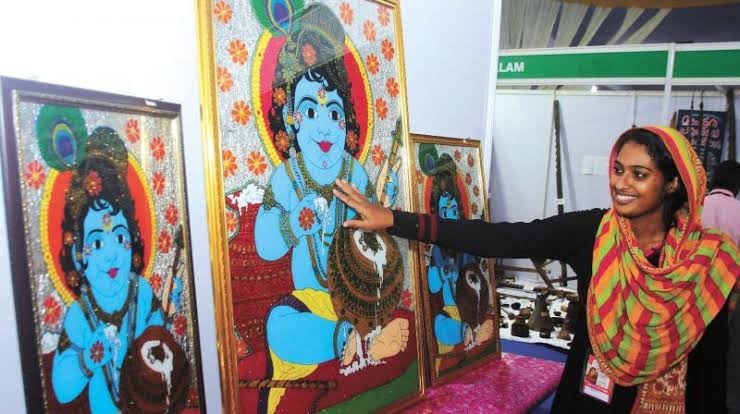 Kozhikode: This 28-year-old Muslim homemaker from Kerala has drawn over 500 paintings of Lord Krishna in the last six years but her faith has not permitted her to keep any one of them in her home.

She has been gifting the portraits of little Krishna to the famed Guruvayur Sri Krishna Temple in Thrissur without fail in these years but tradition and customs have not allowed her to go inside the shrine or present it in front of the sanctum sanctorum.

As non-Hindus are not permitted inside the ancient temple, she would either place her painting near the hundi in front of the portal or hand it over to shrine staff on Vishu and Janmashtami days every year.

But, all these have never drained the spirit and longing of this devout Muslim woman, hailing from a conservative family in Koyilandy in this north Kerala district, to draw the paintings of the Hindu deity.

Setting aside the stiff objection from her relatives and community members, Jasna Salim, a 28-year old homemaker, has done over 500 paintings of little Lord Krishna, which have a large number of takers in and outside the state.

And, now, the untrained painter says her happiness knows no bounds as she could directly present a painting of her at a Hindu temple after they formally requested it.

Ulanadu Sree Krishna Swamy temple, located near Pandalam in Pathanamthitta district, on Sunday ritually accepted her painting, depicting little Krishna with a butter pot, after inviting her there.

"It was really a dream come true for me. It was for the first time in my life that I was going inside a temple and seeing the idol of a deity standing in front of the sanctum sanctorum," Salim told PTI.

Though once she had been to a family temple near her home here during a festival, she did not go near the sanctum sanctorum or see the deity.

"It was really a soulful experience...the temple authorities explained the rituals to me. I opened the painting standing in front of the sanctum sanctorum and showed it to the deity. The priest adorned the painting with a tulsi garland," the woman said.

A mother of two, Salim said she had been approached by the temple authorities after seeing a picture dedicated to the Guruvayur temple by her during the last Janmashtami.

The management informed the painter recently that a Pune-based devotee group wanted to offer a little Krishna painting to the village temple and they wanted Salim to draw it.

As there is no ban on non-Hindus to go inside the village shrine, the Muslim artist could visit the temple in person and present her artwork to the deity.

Interestingly, all her paintings, whether done on canvas or glass, are of only one theme- infant Krishna with his butter pot.

The artist said she could draw only little Lord Krishna with such perfection and she failed to do other themes with such grace.

"I do not know the reason... I am actually an accidental artist and have no professional training...I started painting all of a sudden six years ago when I was pregnant and was under bed rest after an accident. I can paint only Lord Krishna with perfection," Salim said.

When she drew the first painting of the Hindu deity, her husband advised her to destroy it as it might irk her conservative parents and other relatives.

But, Salim said her consciousness did not allow her to do it and so he gifted that to a Namboothiri family living nearby.

The family, who had kept that painting in their pooja room, later claimed that many of their wishes had been fulfilled after that.

"The story of the Muslim woman painting Lord Krishna has spread fast in the area and several people have started approaching me for painting. Many others also claimed that their unfulfilled wishes have been fulfilled after placing it at home. I do not know anything about it," she said.

Now, even celebrities are placing orders to get little Krishna paintings from this young artist. Not just from Kerala, but she is getting orders from neighbouring states like Karnataka and Tamil Nadu also.

She paints at least five to six pictures a month and charges up to Rs 5,000 as per its size.

"My husband, who is working in Dubai, has been very supportive since the beginning. Majority of his friends are from the Hindu community. Now, my parents have also no objection as they know that I won't deviate from my faith and do anything against my religious principles," the Muslim artist said.

The parents only wanted her not to keep the Krishna paintings at home, which she abides by strictly.

However, many of her relatives were still not convinced about her artwork.

"I am not doing anything wrong and so there is no need for me to take their objection seriously. As per my religion, my father and husband's words are of top priority for me. They have no objection to what I am doing, If my paintings are giving happiness to others, why should I stop?" she asked.

The woman, who had to stop her education in 10th standard, now keeps another dream in her mind- to gift a Lord Krishna painting to Prime Minister Narendra Modi. Bhopal: Artworks of 12 women painters, ceramists to be displayed on International Women’s Day