According to the police, the clash erupted after vehicles of some members of the two groups were hit, following which people started hurling abuses and firing in the air.
PTI 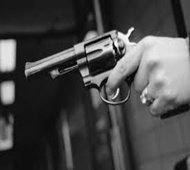 A former Army man allegedly gunned down two persons during a clash between two groups of a community in Gujarat's Porbandar town, police said on Saturday.

An offence has been registered against 11 persons, including a local BJP councillor and his son, for the incident that took place on Friday night, an official said.

The two groups held a grudge against each other over some past dispute about the municipality election held in February last year, Superintendent of Police Porbandar Ravi Mohan Saini said.

"Last night, some members of two groups from Maher community clashed. One of them was a former Army man, who had a licenced weapon. Two persons died from shots fired from the weapon at a close range," the official said.

According to the police, the clash erupted after vehicles of some members of the two groups were hit, following which people started hurling abuses and firing in the air.

Armed with a revolver, swords and baseball bats, they attacked each other, leaving two dead and one (the complainant) seriously injured, it was stated.

The police have arrested three persons including ex-Army man Arbham Odedara and seized the weapon, he said, adding that efforts are underway to nab others.

An FIR has been registered under sections 302 (murder), 307 (attempt to murder), 143 (unlawful assembly), 147 (rioting), 148 (rioting armed with deadly weapons) and 504 (intentional insult) of the IPC against 11 persons, an official of Kamla Baug police station said.

The deceased persons were identified as Kalpesh Bhutia and Raj Keshwala, he said.

Local BJP councillor Bhima Odedara and his son Nilesh are among 11 persons named in the FIR, he added. Rajnath briefs PM about killing of 3 Army men in Ladakh