States Congress, the people of Gujarat will not allow rampant privatisation of education and healthcare.

Ahmedabad: Reminiscent of Congress leader Rahul Gandhi’s best Gujarat forays in 2017, the Gujarat Congress on Saturday released the party’s manifesto for the December 2022 elections with a promise to halt “mindless privatization of healthcare and education” and provide the panacea for the pains of the farmers.

Released the “Ghoshna Patra”, party’s senior observer for the Gujarat polls and Rajasthan Chief Minister Ashok Gehlot, the Congress leaders claimed that instead of thrusting a promise paper decided by a group of leaders on the people the present manifesto was based on the feedback of Gujaratis.

Ashok Gehlot said, “It was Rahul Gandhi who had told us that the people must be asked what they want in the manifesto and not a committee like earlier.” Over 6 lakh people had sent in their suggestions and this “manifesto would become a government document if we win the elections,” he added.

The manifesto, which includes Rahul Gandhi’s eight promises during his visit to the State on September 5, 2022, states that a Congress government would stop the “mindless privatisation of education and health sectors.”

Congress' official Twitter page posted, “The people of Gujarat will not allow rampant privatisation of education and healthcare. Let's bring the change together.” It might be recalled that this was the thrust of Rahul Gandhi’s best Gujarat campaign in 2017 when he hit out at the corporatisation of sectors that should be the primary duty of a welfare state.

The Congress manifesto for Gujarat Assembly elections promises waiver of farmer debts, availability of LPG cylinders to the people at Rs 500 a bottle and 300 units of electricity for free. While waiving debts of farmers has been a consistent assurance of Rahul Gandhi, the free electricity promise is a leaf from AAP supremo Arvind Kejriwal’s book.

The Congress has responded to the demand for implementation of the old pension scheme for the government employees, besides also promising to set up a chain of Janata Medical Stores. The party would give government jobs to family members who lost their kin to Covid-19.

Both Gehlot and Gujarat Congress President Jagdish Thakor expressed confidence that the party would “form the government in Gujarat by winning 125 seats” out of 182.

Stating that the AAP is more gas than substance, the Rajasthan Chief Minister said, “Aam Aadmi Party does not stand here. People of Gujarat will not accept them.” 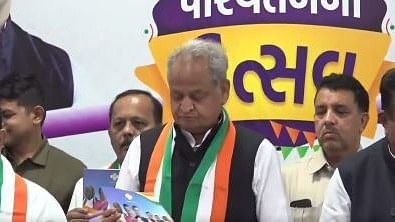