The Delhi High Court Friday dismissed a plea seeking direction to transfer from Delhi Police to the NIA, the investigation of a case lodged against Tablighi Jamaat leader Maulana Saad for holding a congregation in March in alleged violation of the orders against large gatherings to contain the spread of COVID-19.

A bench of Justices Siddharth Mridul and Talwant Singh dismissed the petition after the petitioner sought to withdraw it with the liberty to approach the Supreme Court.

"Advocate Yash Chaturvedi for the petitioner seeks liberty to withdraw the petition with liberty to further prosecute the petition seeking similar relief instituted by him hereinbefore the Supreme Court. Leave and liberty granted The petition is dismissed a withdrawn," the bench said while dictating the order.

The bench said once the petition has already been filed in the Supreme Court with similar prayers, it cannot keep it pending here.

The petition filed by Mumbai-based lawyer Ghanshyam Upadhyay has also sought a direction to the NIA to investigate the matter in a time-bound manner and the probe be monitored by the high court, alleging that the Delhi Police has failed to arrest the leader despite lapse of considerable time.

It had claimed that the crime branch of Delhi Police has miserably failed in tracing out/ apprehending/ arresting Maulana Saad, despite lapse of considerable time and his photograph being published in electronic media.

"It is virtually impossible for Maulana Saad to hide for such a long time and that too in the capital of the country. Performance of the Delhi Police has been pathetic from the very inception and outset. Failure of the Delhi police is explicit from the fact that despite there being lockdown and curfew-like situation, Maulana Saad was able to arrange a gathering of thousands of people belonging to Tablighi Jamaat in the capital of India," the plea claimed.

The plea alleged, that "from media reports and evidence so far collected by Delhi Police Crime Branch, it is now axiomatic that Maulana Saad and his henchmen conspired to spread and transmit coronavirus in different parts of the country, with the oblique and ulterior motive of causing massive deaths all over the country and thereby to derail the Government of India in preventing the deadly disease." The Delhi Police's crime branch had on March 31 lodged an FIR against seven persons, including the cleric, on a complaint by Station House Officer of Nizamuddin police station here for holding a congregation of Tablighi Jamaat followers in alleged violation of the orders against large gatherings to contain the spread of coronavirus.

The Enforcement Directorate has also filed a money laundering case against Saad, trusts links to the Jamaat and others.

The plea alleged that the acts of omission and commission of Saad and his associates / Tablighi Jamaat constitute "terrorist acts/activities" as defined under the Unlawful Activities (Prevention) Act (UAPA) and claimed that the Delhi Police has failed to arrest the leader despite lapse of considerable time.

It said people of Tablighi Jamaat have been spreading the deadly virus all over the country not only by defying the national lockdown, but also by assaulting corona warriors who have been treating the patients. 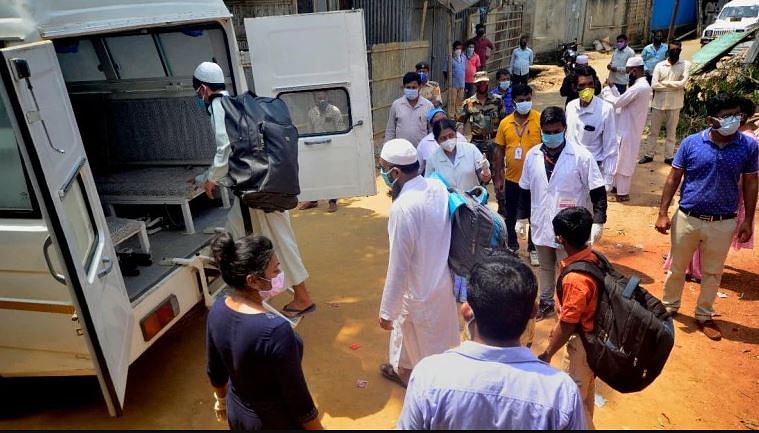