Days before Taliban capture, IAF evacuated around 50 Indians from Mazar-e-Sharif

India had earlier also picked up its consulate staff from Kandahar after the town was about to be taken over by the Taliban terrorists.
ANI 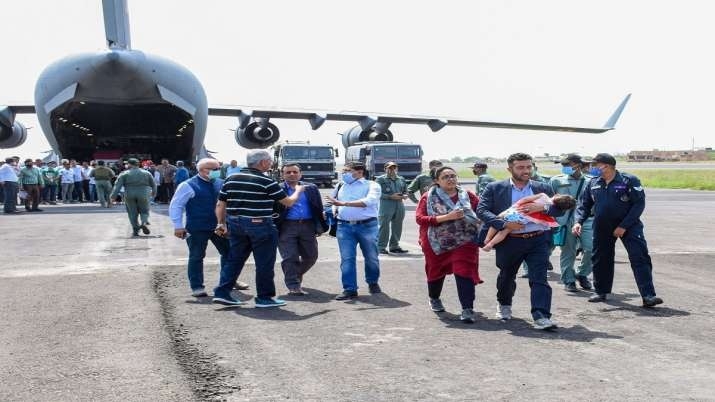 New Delhi: Amid the Taliban surge in different parts of Afghanistan, the Indian Air Force (IAF) had evacuated around 50 Indian consulate staffers and security personnel from Mazar-e-Sharif, a couple of days before the city was captured by the terrorist organisation.

The Indian citizens were evacuated from Mazar-e-Sharif on August 11 and 12 in a special transport aircraft of the IAF which included civilian officials working in the Indian consulate there along with the Indo-Tibetan Border Police officials(ITBP) deployed there for the security of the facility.

"An Indian Air Force aircraft had taken off from the Hindan airbase near Delhi and landed in Mazar after avoiding flying over Pakistani air space. The aircraft then picked up the Indian officials and landed back safely on August 11-12," sources told ANI.

India had earlier also picked up its consulate staff from Kandahar after the town was about to be taken over by the Taliban terrorists. The Indian officials from the Kandahar consulate had later stationed themselves in the Kabul embassy and were overseeing work from there, the sources said.

After the capture of the capital Kabul earlier this week, the Indian Air Force operated two sorties of the C-17 Globemaster after getting clearance from the US forces at the airport there and brought back around 180 officials, ITBP staffers and a few journalists.

Another Indian Air Force plane is awaiting permission from the local Afghan authorities and US security forces to land in Kabul to bring back more Indian citizens who are still stuck there.

Sources in the government said that both Air Force and commercial planes are on a stand by to bring back more Indians from Afghanistan. The Indian Air Force has already evacuated around 180 Indian passengers.

Top sources told ANI that, "The US security forces are controlling the Kabul airport and after the conversation between the two NSAs, the Indian contingent was taken inside the American security zone at the airport from where they took off this morning".

The Indian C-17 aircraft was also given clearance to land at the Kabul airstrip after coordinating the evacuation efforts with the American officials on the ground.

Sources said that due to the situation on the ground in Kabul, the Indian officials' exit had become a bit difficult but was arranged eventually.