Much like Kumaraswamy in Karnataka, Dushyant Chautala could even become the new CM of the state.
FPJ Web Desk 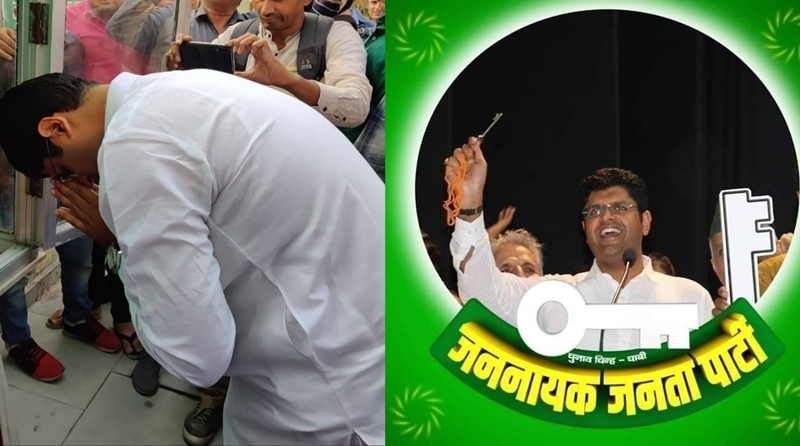 As things stand, it looks like Haryana could’ve a new kingmaker. On Thursday, even as the results poured in there was talk of a new kingmaker in Haryana – Dushyant Chautala.

Much like Kumaraswamy in Karnataka, Dushyant Chautala could even become the new CM of the state. According to a report in News 18, the Congress had already sent feelers to Dushyant Chautala, offering them the CM post.

The Congress had pulled off a similar move in Karnataka where they offered the CM post to Kumaraswamy. Meanwhile, it’s also being reported that BJP has also approached Chautala.

The Jannayak Janta Party (JJP) was formed in December 2018 after a split from the INLD.

The INLD ruled Haryana from 2000 to 2004 and was the main opposition party. It split after a fight between Dushyant’s father Ajay and Abhay Chautala.

How is he doing?

The JJP leader has attained a comfortable lead of 10,420 votes over Lata, who is a sitting MLA and wife of former Union Minister Birender Singh, according to latest trends.

Who is Dushyant Chautala?

One of the youngest parliamentarians when he contested on the INLD ticket from Hisar, this time he came 2nd, losing to BJP’s Brijendra Singh by 3 lakh votes.

His father Ajay is the older son of four-time CM and INLD President Om Prakash Chautala. He is a business graduate from the California State University and they split from the INLD last year.

As of now, Chautala remains evasive refusing to comment on who he will support.

He said as the trends came in to NDTV: “The decision is not for Dushyant Chautala to make. There will be a national executive, a legislative party leader will be chosen...such decisions will be taken then.

The way trends are coming, it shows that people have voted for change. The Haryana Vidhan Sabha will be opened by the key of the JJP. Not even a single minister is winning... People used to call us the party of children.”

At least 30 seats in Haryana are dominated by the Jat-Dalit-Muslim vote bank. While the Jats have been disenchanted by BJP after Gurmeet Ram Rahim’s arrest.

While the godman might be a subject of ridicule in other places, he has a massive following in Haryana and holds sway over a significant Dalit vote bank. Pundits had predicted that the JJP would be the likely benefactors of the Jat-Dalit-Muslim voters’ disillusionment.

As things stand, Dushyant Chautala could unlock the door to the Haryana assembly, which is symbolic given that is his election symbol – the key.