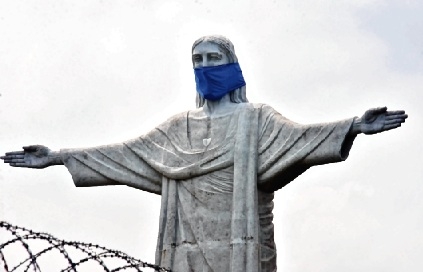 A model statue of Christ the Redeemer wears a mask to raise awareness in Kolkata. | —ANI

Srinagar: Militants shot dead a BJP councillor in the Tral area of Pulwama district in Jammu and Kashmir on Wednesday, officials said here. The militants opened fire on Rakesh Pandit at his home in the evening. Pandit was rushed to a hospital where he died. A woman — whose identity is being ascertained — also sustained injuries in the firing by militants, the officials further added.

Street walls of the Amritsar East assembly constituency in Amritsar on Wednesday appeared plastered overnight with a large number of posters, proclaiming that area MLA Navjot Sidhu has gone "missing". The posters also announced a reward of Rs50,000 to anyone who traces the legislator and brings him back to the constituency. The posters were pasted by an NGO, 'Dhan Dhan Baba Deep Singh Ji' stating, "Congress MLA Navjot Singh Sidhu is missing". NGO representative Anil Kumar Vishist Bunty alleged Sidhu had been inaccessible to the residents of the Amritsar East assembly constituency. He alleged a lack of development of the area and claimed heaps of garbage and stranded water on the roads could be seen anywhere.

Punjab Cong rift: Panel meets ex-state chiefs, MPs: The Congress committee set up to resolve factionalism in the party’s Punjab unit on Wednesday met former state chiefs and some MPs, who are learnt to have rai­sed issues related to govern­ance in the state. Sources said some leaders demanded the organi­sation in Punjab be set right ahe­ad of the 2022 assembly polls.

Maganti Ravindranath Chowdhary, the son of former MP from Andhra Pradesh, Maganti Babu, was found dead at a hotel in Hyderabad. Ravindra­nath, who was staying at the star hotel in Banjara Hills for the last few days, was to vacate the hotel room on Tuesday evening. When he did not come out of his room, the staff tried to contact him. As there was no response to the repeated knocks on the door, they alerted the police who rushed to the hotel and broke open the door. Ravindranath, aged around 30 years, was found lying on the floor. He had reportedly vomited blood. He was rushed to a hos­pital and declared brought dead.

8 killed in UP LPG cylinder blast

Eight people, including 3 kids, were killed and 7 others severely injured when a 2-storey building collapsed following a cooking gas cylinder blast in Tikri village of Gonda, UP, on Tuesday night, police said on Wednesday. CM Yogi Adityanath expressed shock over the deaths and directed officials to provide better treatment to the injured. He asked the district magistrate to enquire the cause of the incident and submit the report to the government at the earliest.

A man killed his wife with an axe and dragged her body on the road for 80 metres and then surrendered to police. His 6-month-old child, who was also injured, succumbed on Wednes­day in the hospital. This heinous crime took place in Kota city of Rajasthan on Tuesday. Police said accused Sunil suspe­cted his wife Seema of having an illicit relation­ship. There was a quarrel bet­ween them in the evening and Sunil slashed Seema’s neck with an axe, dragged the body on the road for 80 metres and went to the police station to surrender. His 6-month-old child was also hurt and was admitted to hospital, but succumbed on Wednesday mor­ning. Police said the accused was arrested for rape and was in jail for 7 years. —Manish Godha

A9-year-old boy died of a rare blood disease just within two hours after his mother had app­lied for his mercy killing in court on Tuesday, said police sources. The couple's nine-year-old son Harshavardhan was detected with a rare blood disease. The family lives in Birjepalli village in Cho­wdepalli Mandal of Chittoor district, Andhra. When Harshav­a­rdhan was 4, the poor couple got to know their son had a rare blood disease. Despite receiving treatment his health did not improve. The parents had to seek aloans of Rs4 lakh for treatment. With no choice left to them, Aru­na made an application to Pung­anur Court on Tuesday requesting either the govt should take care of her son or the court should allow for his mercy killing. Within 2 hours of the plea, the boy breathed his last on the way to the village from the court. 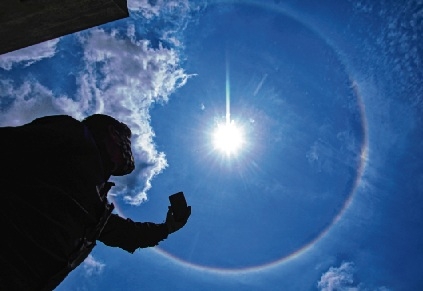 HALO IN THE SKY: A solar halo forms in the sky after heavy rain in parts of Hyderabad on Wednesday. | —PTI