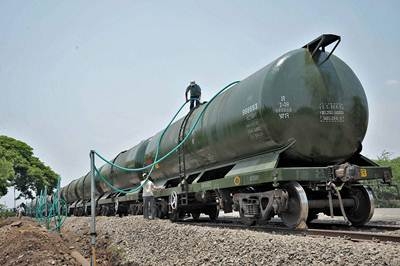 Monsoon woes have resulted in water scarcity in 10 districts of Rajasthan and a water train will run to supply drinking water to the Pali district of the state from next month. It will run from Jodhpur to Pali and will cost around Rs 200 crores, despite this the Pali will get water once in four days.

Pali is a south-western district of Rajasthan with a population of around 23 lakhs and its 582 villages and 10 towns and the city gets water supply from Jawai Dem only. The dam is entirely dependent on rainwater. This year the Rain god is annoyed with the region and Pali is blessed with just 238.64 mm rain till now which is 38.9 per cent less than the average rainfall of the district, so the dam has just 10.85 per cent of water in it.

Looking at the situation the PHED department has decided to run a water train from Jodhpur that will carry around 20 MLD water every day to the district. The train will supply only drinking water and no irrigation will be possible, though despite this people will get water once in four days. The same situation had occurred in 2019. The situation is critical and we had proposed the water train from September 20th but there are some issues with railway so it will start from October 1st,’ said Kan Singh Ranawat the executive engineer of the PHED at Pali.

It is to note that the monsoon is not very kind to the Western Rajasthan this year, Almost the entire region is in the category of deficit rainfall and the worst situation is in the Jodhpur division where the rainfall is 47.5 per cent less than the average till now. The situation has resulted in water scarcity in 10 districts. Even the capital city of Jaipur will have to face a difficult situation as the Bisalpur Dam that supplies the water to 4 districts including Jaipur has just 32.68 per cent water left.

Notably, the monsoon stays in Rajasthan till September 15th and starts returning first from the Jodhpur division, although the Meteorological department at Jaipur has predicted increased rainfall activity from next week in Western Rajasthan. Rajasthan local body polls - An interesting battle that will reveal which party is more affected by...