The prominent peasant leader was produced at the court in Guwahati on Thursday.
Jayanta Kumar Goswami 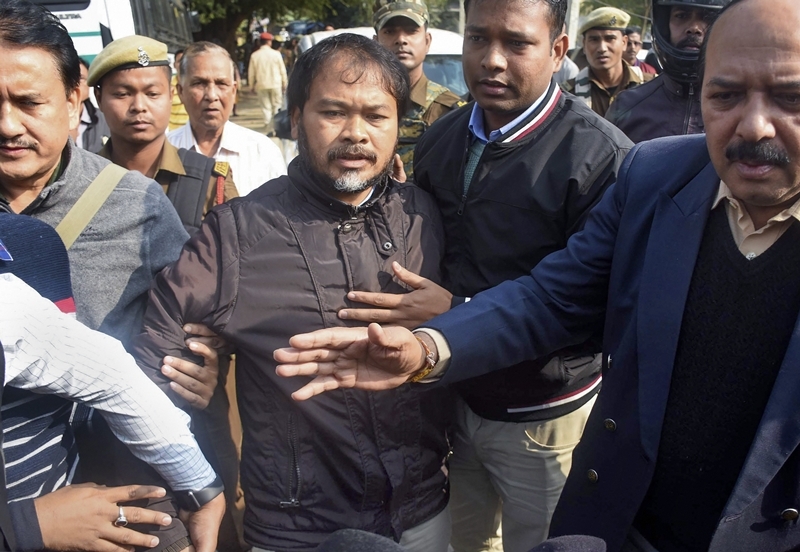 The prominent peasant leader was produced at the court in Guwahati on Thursday. Earlier on Wednesday, Gogoi was flown in from Delhi to Guwahati. He was brought to the court by a team of sleuths from the office of the anti-terror agency in Tetelia near Guwahati.

Earlier on Thursday, sleuths of the CID conducted raids at the residence of Akhil Gogoi at the Nizarapar area, and at the office of the KMSS at Gandhibasti in the city. Talking to the media, Akhil Gogoi’s wife Gitashree Tamuly said that the CID team seized his PAN card, bank passbook and other bank details. They were looking for files related to Kaziranga Orchid and Bio-diversity Park.

The search team also seized some of his unpublished writings, a laptop and some other files relating to his agitation against the big dam in the state. At least 40 books have also been picked up from the office of KMSS.

“One of the officials asked me why we held protests during a time when the Japanese Prime Minister was to visit the city to ink treaties with PM Modi,” Gitashree said.

Gogoi was arrested under the stringent Unlawful Activities (Prevention) Act (UAPA) in Jorhat recently. He has been booked relevant IPC and UAPA Sections. The next hearing of the case will be on January 10, 2020.