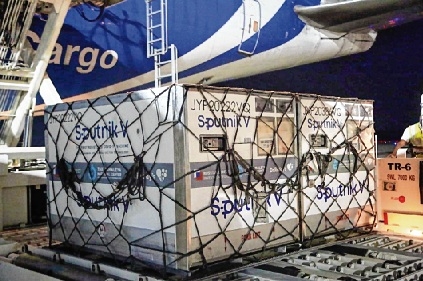 Hyderabad: A consignment of 3 million doses of Russia’s Covid-19 vaccine Sputnik V landed at the Rajiv Gandhi International Airport here on Tuesday. A GMR Hyderabad Air Cargo (GHAC) press release said the vaccine consignment arrived from Russia on a specially chartered freighter RU-9450 which touched down at Hyderabad Airport at 03.43 hours. “While GHAC has already handled several import shipments of vaccine prior to this, today’s shipment of 56.6 tonnes of vaccines is the single largest import shipment of Covid-19 vaccines handled in India to date.This shipment completed all processes and was dispatched in less than 90 minutes,” it said. The Sputnik V vaccine requires specialised handling and storage, required to be kept at a temperature of -20 C.

Central staff to get 31% DA

NEW DELHI: The Central government employees and pensioners are expected to get 31% dearness allowance (DA) / dearness relief (DR) from July in view of the All India Consumer Price Index published by the Labour Bureau increasing by 0.5 point to stand at 120.1. The government had frozen the DA till June 2021 because of its heavy expenditure on the Covid pandemic and so it is expected that the hiked DA will be available from July. Shiva Gopal Mishra, secretary of the staff side of the Joint Consultancy Machinery (JCM), says it is already in touch with the Finance Ministry to plead not to freeze the DA further but release it to the employees with the salary of June in July as more money in their hands will enable them to spend more, giving a boost to the sagging economy. —Our Bureau

New Delhi: The Delhi Police has suspended the arms licenses of wrestler Sushil Kumar and businessman Navneet Kalra as they face criminal cases, officials said on Tuesday. Their licenses were suspended on Monday. The police have moved to cancel them. Joint CP (Licensing) OP Mishra said, "We have suspended the arms licenses of Kumar and Kalra with immediate effect. The process of cancellation of their licenses has been initiated. They were served notices to explain why their licenses should not be cancelled. We have done it on the basis of reports of the concerned investigating agencies and local police in the criminal cases recently registered against them."

2 killed as UP building collapses

Varanasi/ Malda: Two labourers were killed and 6 others injured after a portion of a 2-storey building collapsed in the Kashi Vishwanath corridor in Uttar Pradesh's Varanasi, where construction was going on. The incident happened around 3.30 am when the labourers, all from Sujapur in West Bengal's Malda district, were sleeping at the old building, TMC's Rajya Sabha MP Mausam Benazir Noor said. PM Modi spoke to Varanasi district magistrate Kaushal Raj Sharma and assured all possible help. Sharma, in a tweet said, the PM expressed his condolences to the families of those killed in the incident and directed officials to provide proper medical care to all the injured. 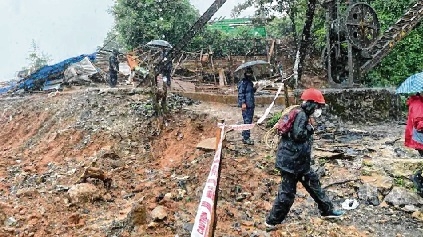 Shillong: Heavy rainfall on Tuesday hampered operations to rescue over 5 miners trapped for 2 days deep inside an illegal rat-hole coal pit in Meghalayas East Jaintia Hills district, officials said. The district administration has identified 5 miners, 4 from Assam and 1 from Tripura, who were trapped at the coal pit in the remote Umpleng area of Sutnga Elaka since Sunday when a dynamite blast had led to the flooding of the coal mine. SP in neighbouring Assams Silchar district had sent information to the authorities here about the possibility of 6 miners of his state being trapped in the mine. “Heavy rainfall hampered rescue operations. 24 personnel of State Disaster Response Force (SDRF), and fire men are at the site. “We are trying to mobilise a crane to first ascertain the depth of the mine,” district deputy commissioner E Kharmalki said. A high-powered pump has also been requisitioned but this would be put into operation once the divers can go inside the pit to find out if anyone is alive.