Fresh off his legal battle with his ex-wife Amber Heard, Johnny Depp took to his social media and warned fans of fake accounts made in his name.

He wrote, “I’ve been made aware that there are fake accounts pretending to be me or people working with me. I do not have any private or side accounts on any platforms. These are the only pages run by me and my team where we share updates and communicate: INSTAGRAM @Johnny Depp TIKTOK @Johnny Depp FACEBOOK @Johnny Depp DISCORD @Johnny Depp0854."

“I ask that you remain cautious as it seems these fake accounts can be relentless. My team is working to combat the problem. Thank you for your continued support and for making me aware of this issue! Love & respect, JD X," he added. 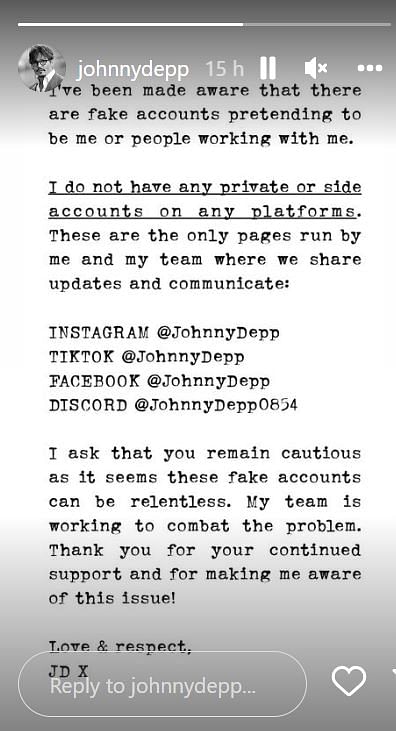 Earlier this month, Depp announced that he and legendary guitarist Jeff Beck will release an album of mostly covers next month.

The duo's 13-track album is titled "18" and will drop on July 15. They said they titled the album after the creative outburst they felt working together.

In a major relief for the 'Pirates of the Caribbean' star, a jury sided with him in his defamation lawsuit against ex-wife Amber Heard, awarding the actor more than USD 10 million and vindicating his allegations that Heard defamed him by accusing him of abusing her before and during their brief marriage.

But in a split decision, the jury also found that Heard was defamed by one of Depp's lawyers, who accused her of creating a detailed hoax that included roughing up the couple's apartment to look worse for police. The jury awarded her USD 2 million.