The filmmaker talks about his upcoming film Gandhi Godse – Ek Yudh, choosing its cast, and more

Director Rajkumar Santoshi is returning as a director after a hiatus of nine years with Gandhi Godse – Ek Yudh. The film stars Deepak Antani, Chinmay Mandlekar and newcomers Anuj Saini and Tanisha Santoshi. The film will hit screens on January 26. The Free Press Journal caught up with the filmmaker for an exclusive chat.

When asked if he believes in Mahatma Gandhi’s  ideologies, Santoshi explains, “I have always believed in Gandhiji’s ideologies. Damini (1993) and Ghatak (1996) were based on them. However, if I have to choose between violence and an act of cowardice, I will choose violence. Gandhiji felt Ahimsa ka matlab nahin hai aadmi buzdil ho jaye. There is a huge difference between being a coward and Ahimsa. Many people cover up their cowardice act under the wings of Ahimsa. You can’t deny his ideologies but on the other hand, he was not a perfect man and he had his faults. This you shall watch in the film.”

Read Also
Tanisha Santoshi on Gandhi Godse Ek Yudh: ‘I have no concerns about taking an unconventional route... Santoshi was initially reluctant to cast his daughter Tanisha in the film. “I didn't want to cast her. I was indeed avoiding her. As a father, I have not done anything for her. She is not even there on the posters. She was treated like any other artiste. She did her filmmaking course in London.  During narration she came to know that there was a role. I only look for two qualifications before casting anyone. The actors should not have ego and should not be arrogant. Also, they should be ready to work. We had a duet song composed by AR Rahman, but we removed it after watching the rushes as I felt it was distracting the attention amidst such great dialogues between Gandhi and Godsey.”

In the film, Chinmay plays Nathuram Godse and Deepak plays Gandhi. Talking about casting them, he says, “For Gandhi’s role we had decided to cast a new Gujarati actor and didn't want to cast a star at all for the role. But for Godsey, I always wanted to cast a Marathi actor. I didn’t know Chinmay but the casting director recommended him. He is an actor with intense eyes. I later came to know he is from NSD. Deepak is cast for Gandhi’s role. Both of them have performed very well." 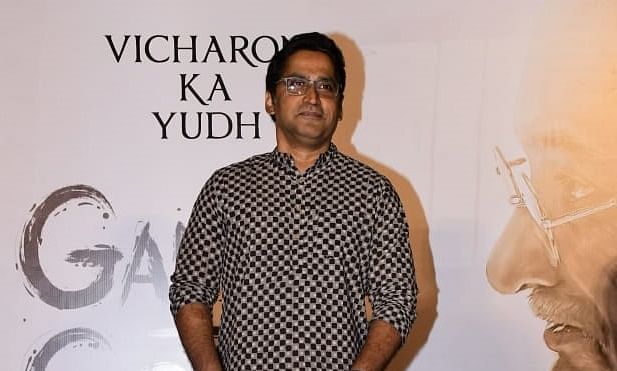 As per news reports, Santoshi was planning to make his comedy classic Andaz Apna Apna (1994). Reacting to it, he says, “I don’t wish to repeat it but I will make it in the same genre. I have a musical comedy subject ready at the moment. It will be two heroes/heroines and a romantic comedy. I might cast Tushar Bhatia. Probably I shall announce that this Diwali. Maybe it will have the Andaz Apna Apna factor (smiles)."

On a parting note, we quizzed him about which Bollywood stars he wants to work with. “I wish to work with Abhishek Bachchan and Sanjay Dutt. They all are brilliant actors and they inspire me. I have almost worked with everyone except Shah Rukh Khan and Hrithik Roshan. By the blessings of God from my first film, which became a huge hit, all the stars became friendly to me.I share a good relationship with the so called stars. I have no differences with any stars. I find Abhishek a very promising actor. Unke sath film industry mein insaaf nahin huwa. He is an intense actor. I don’t have any story immediately but shall do something in future,” he concludes.