Workers, the axis of Sivakasi's fireworks industry, toil and sweat to fight odds 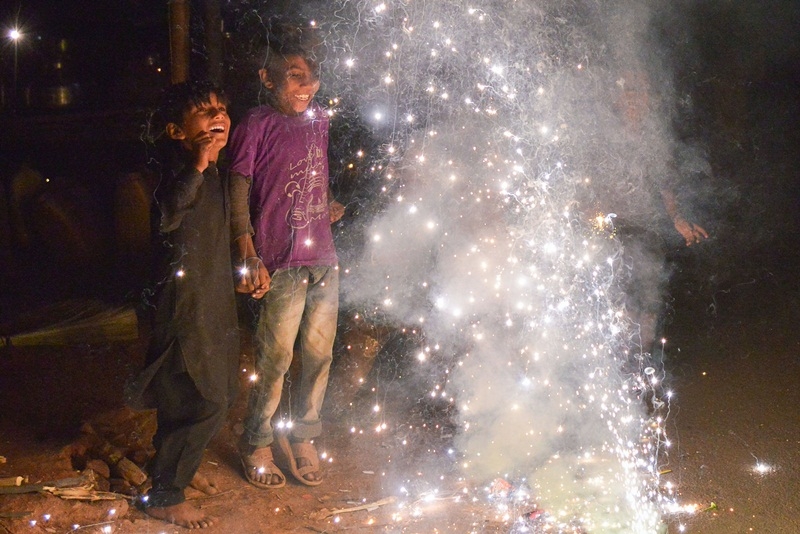 Only a lone liquor outlet could be spotted in this barren landscape, on the desolate road to villages like Alamarathupatti from Sivakasi that are home to a string of firecracker manufacturing units.

As the sun sets, workers of firework units mill around the solitary liquor shop downing their choice beverage and laughing away their travails, which is also a pointer to alcohol dependence among a chunk of them.

Many workers like M S Velusamy, who earn about Rs 300-Rs 350 as wages per day spend a half of their earnings to consume liquor, at least on two to three days a week. As both the spouses work in several cases, they try to make ends meet and womenfolk act as a 'deterrent' to try and prevent their husbands from consuming alcohol often and excessively.

While this is a challenging scenario for sections of workers, the approximately three-lakh strong workforce in the firecracker industry particularly those in unlicensed, grey units everyday face chemical hazard and a possibility of detrimental health effects.

With whitish grey powder-chemical compounds that go into the making of firecrackers- all over and his eyes appearing red, a worker hurries to take a bath in the factory premises following completion of the day's work as a delay would mean difficulty in removing the 'powder' from sore like spots over his neck, chest and abdomen.

A veteran worker of a unit off Sengamalathupatti, he applies coconut oil, sitting under a tree after bath. "It gives a soothing effect," he says and does not want to be named. A woman worker has boil-like small bumps all over her face but chooses not to answer. Workers wrapping small chemical packs with jute thread for atom bomb crackers, stick an adhesive like paper over their fingers, as continuous friction causes skin irritation and rashes. "But it does not help always. The cover slips away," says a worker.

Most workers could be seen either directly touching or handling chemical ingredients of some kind or the other during several levels of the manufacturing processes. Industry people say that hazardous process like filling and mixing are carried out in safe, separate enclosures early in the morning and such tasks are assigned only to trained men. All other processes are non-hazardous, they say.

In some factories, workers say they get Rs 20 as "banana allowance" to eat banana to aid easy digestion and "help neutralise" adverse effects in view of exposure to chemicals.

Owners of firework units say they "take good care of the health of employees which includes Employees State Insurance cover," and some point to periodic health camps as well.

Velusamy, Venkitakaruman and other workers, who have spent over 20 years in the organised industry told PTI, "though not all of us develop allergies or other issues, a section of workers develop some health issues." Velusamy, who recently underwent a coronary bypass surgery in an ESI facility says with a chuckle, "chemicals should suit your body constitution, else it may be difficult; skills and endurance are needed to sustain." For all the hard work, workers approximately get anywhere between Rs 290 to Rs 500-Rs 570 per day as wages and a bonus ranging between 20 and 27 per cent in addition to Provident Fund and Employees State Insurance Scheme cover. The pay structure is only indicative and applies to organised, licensed and properly run units and about 55 per cent of the workforce is women.

Remuneration, in some big units as well, covers aspects like the "piece rate" concept and working hours (up to 4 and 8 hours) and pay varies depending on the kind of work done while hazardous processes like chemical filling are mostly assigned to men. Workers say that annual hike is pending in several units for at least two to three years.

Unlike well-defined and mandated practices to ensure safety in regulated, licenced units, workers in unlicensed and illegal firecracker manufacturing cottage industry are exposed to grave hazards and a chunk of accidents, at least over a dozen mishaps with many casualties over a span of about 3 years, were reported from grey units.

Apart from some people who manufacture crackers at homes without any approval, illegal units involve a cobweb of ties between the original licensee and several others, who actually manufacture firecrackers without statutory permissions.

In villages off Vembakkottai like Thayalpatti, making of firecrackers at homes is well known locally and most people engaged in the work are also aware of the risk of accidents.

While licensed firms spend on infrastructure, safety and pay taxes, their absence in grey units widens the scope of profits for them, industry insiders claim.

A former worker of firecracker industry, A Rajkumar recalls that his friend was among the 20 people killed in a fireworks unit at nearby Achankulam in February.

Among the victims was a young, pregnant woman, Rajkumar, who reached the spot early to rescue workers, says with a shudder while recalling the ghastly accident.

"In my mind's eye, severed limbs and blood at that spot have not disappeared yet and it is a nightmarish experience. Ignoring safety norms could be fatal. Now, I am not in the fireworks industry. I moved on to the construction sector." While a section of people engage themselves in illegal making of firecrackers eyeing huge profits, some are ignorant, while others are forced by their circumstances to take risks. "Some people take huge money in advance and hasten to finish work often ignoring safety." Unlike defined work and payment structure in duly licensed factories, work in such grey units is organised on several custom-made modes like contract, sub-contract, leasing and so on with huge money in advance from owners often acting like a bait.

"The focus will be to rush and make more money. In such units, one could make many times more money than one could aspire in organised, properly licensed units," he says.

On such illegal units, a senior Virudhunagar district official told PTI that though action was being taken continuously, viewing it only from standpoints like enforcement would be simplistic.

Requesting anonymity, he stressed on more awareness on risks and a roadmap for safe and better remunerative opportunities.

"We have seen cases where workers themselves do not want PF or ESI, jobs in organised sector. They tend to take up work at the same time in multiple units to earn more. This is a tricky issue which has socio-economic dimensions too. Aspiring to earn more is understandable considering many needs like children's education. But the chosen route should be in conformity with laws. We are doing our best." "Accidents can also be prevented by going in for mechanisation and we are working with the industry on it," the official said.

Asked about illegal units, Managing Director, Ayyan Fireworks, G Abiruben batted for strict action. On mechanisation, he says, "arrangements are already on in the (regulated, duly licensed units in organised sector) fireworks industry to mechanise the chemical mixing and filling process. At the same time, mechanisation will not lead to job losses as the automated mixing machine will be handled by the worker who did it manually." In his company, such mechanisation is already in place which ensures absolute safety, he points out.

The industry is also exploring other manufacturing processes that may be mechanised, he says. Ayya Nadar, grandfather of Abiruben was a pioneer who launched the first firecracker manufacturing unit in Sivakasi almost a century ago.

While mechanisation is debated by officials and industry captains, for many workers it is not a decisive factor to bring their sons and daughters to work in firecracker manufacturing units.

Such men and women have been slogging away for years together to ensure that their children did well in studies and secured employment in non-fireworks sector.

"Both my daughters are nurses and my son is a mechanical engineer and all the three are employed. I am happy. My children need not work in the firecracker industry. Let this work end with me and my wife," says 48-year old K Karuppiah.

Similar is the case with several other workers including M S Velusamy, with their children successfully graduating in diverse streams and getting employment in other sectors.

Along with his wife, Karuppiah travels 70 kilometers (up and down) everyday in a company operated bus to reach his workplace near Sivakasi, from his village, off Watrap.

However, not all workers could manage to send their children to colleges or to other fields, like this 46-year old woman, working in a unit near Pallapatti.

Her job is to inject chemicals through a metal tube and suspend two-feet long 'Rope Sparkler' (popularly known as Sattai in Tamil, which means a whip) from a ceiling of endless hooks. The lives of such people are hanging in the balance just like the dangling rope sparklers.