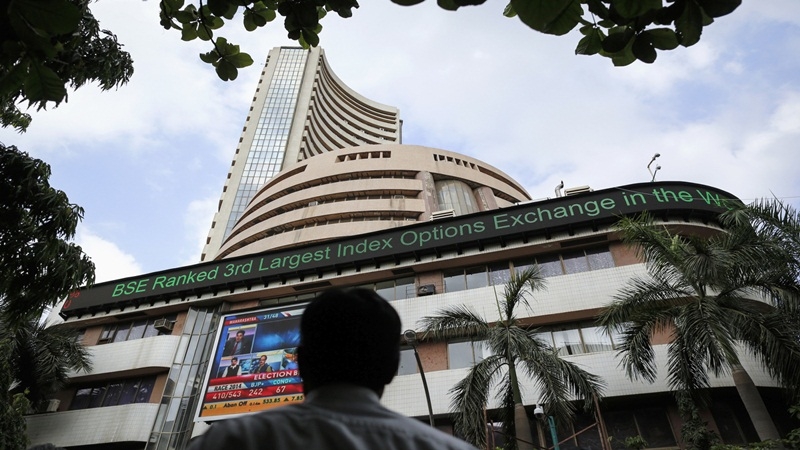 Mumbai: Benchmark indices Sensex and Nifty closed almost flat Thursday after a volatile trade as gains in financials and power stocks were balanced out by heavy profit booking in IT and energy counters. The BSE Sensex erased its early gains to end up by just 2.72 points, or 0.01 per cent, at 37,754.89, extending the winning run to a fourth session.

The broader NSE Nifty closed marginally up by 1.55 points, or 0.01 per cent, at 11,343.25 as gains in financials like IndusInd Bank, Yes Bank, pharma and power stocks were offset by losses in IT, energy and auto stocks. Financials such as IndusInd Bank, Yes Bank, Kotak Bank and HDFC rose up to 2.84 per cent on expectations of loan growth following the RBI’s move to inject liquidity through the dollar-rupee swap auction.

The RBI Wednesday said it would inject long-term liquidity worth USD 5 billion into the system through dollar-rupee swap arrangement with banks for three years. NTPC was the top gainer among the Sensex stocks, rising by 3.53 per cent. Coal India, ONGC and Sun Pharma also rose up to 2.41 per cent. Bharti Airtel, Vedanta and Tata Steel also gained. Losses in index heavyweight Reliance Industries, ICICI Bank, and IT stocks such as TCS, Infosys and HCL Tech offset the gains.

RIL touched a 52-week high of Rs 1,361.45 in early trade but failed to hold onto the gains due to heavy profit booking and ended down by 0.41 per cent. HCL Tech with a 2.11 per cent fall was the biggest loser among Sensex scrips. Hero MotoCorp, Tata Motors and PowerGrid were also among the laggards. “Market was range bound and ended on a flat note while FIIs continued to pour liquidity into the domestic market. RBI’s new mechanism to pump additional liquidity of USD 5 billion through foreign exchange swap from banks is likely to boost loan growth,” Vinod Nair, Head of Research, Geojit Financial Services, said.

The trend in broader markets was mixed with the BSE midcap index shedding 0.26 per cent and the smallcap index ending 0.09 per cent higher. Among sectoral indices, the BSE realty, metal, telecom and healthcare indices ended the day in the green while IT, auto and power indices settled in the red. Bank Nifty hit a record high of 29,070.35 in day trade before settling up 0.13 per cent on hopes that RBI may consider a rate cut on the back of moderate inflation and slowdown in growth.

According to the official data, wholesale inflation inched up to 2.93 per cent in February over the previous month on account of firming up of prices of food items. Foreign investors remained net buyers in the capital markets Thursday also. On a net basis, foreign institutional investors (FIIs) bought shares worth Rs 1,482.99 crore on Thursday while domestic institutional investors (DIIs) were net sellers to the tune of Rs 817.77 crore, provisional data available with BSE showed.

“India seems to be catching up with the emerging market peers after a steep underperformance in first two months of 2019.  FIIs have flooded Indian markets with USD1.8bn till date in March which has partially helped market rally,” Sunil Sharma, Chief Investment Officer, Sanctum Wealth Management observed.

On the market rally, Hemang Jani, Head – Advisory, Sharekhan by BNP Paribas commented: “The markets seem to be in a positive mood ahead of the 2019 general elections. FII’s have pumped around Rs 30,000 crore this year which is a positive for the markets. The markets seem to be factoring another term for the current government.”  Markets may continue to remain volatile with the run-up towards the elections, he added.