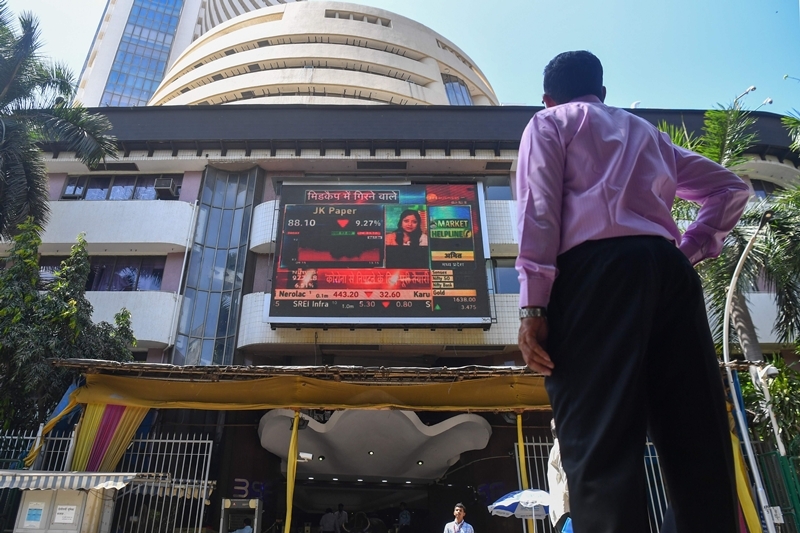 The benchmark indices opened lower on Wednesday (September 29) in keeping with global cues. Wall Street stocks ended sharply lower on Tuesday in a broad sell-off driven by rising US Treasury yields, deepening concerns over persistent inflation, and contentious debt ceiling negotiations in Washington. Asia stocks fell Wednesday after US stocks saw their worst day since May and bond yields spiked on concerns about inflation.

On domestic front, stock specific news shall drive momentum on select counters. Promoter of HDFC AMC plans to offer 1.06 percent of its holding at a price of Rs 2,870 apiece, Lupin launches a new medicine in US, NCLT allows Future group to hold meetings of shareholders and creditors for scheme of arrangement with RIL, Bharti Airtel’s long-term rating has been upgraded to AA+/Stable from AA/Stable, Allcargo Logistics appoints Jefferies as investment banker to evaluate fund raising opportunities.

US equity benchmarks ended sharply lower Tuesday, as Treasury yields extended their climb, putting pressure on the technology sector and growth-oriented shares. The 10-year Treasury yield rose about 5 basis points to 1.534 on Tuesday, rising for six straight trading days and touching its highest level since June.

US Treasury Secretary, Janet Yellen warned that the Treasury Department likely will exhaust extraordinary measures to keep from defaulting on its debt if Congress hasn’t acted to raise or suspend the debt limit by October 18. During a Senate hearing, Federal Reserve Chair Jerome Powell and Treasury Secretary Janet Yellen both warned that a USdefault due to a failure to raise the debt ceiling would have catastrophic consequences.

In US economic data, the Conference Board said its index of consumer confidence slid to a seven-month low of 109.3 this month from a revised 115.2 in August. The U.S. trade deficit in goods rose 0.9 percent in August to $87.6 billion. And the S&P Case-Shiller 20-city home-price index rose 19.9 percent in the year to July.

Asia stocks fell Wednesday after US stocks saw their worst day since May and bond yields spiked on concerns about inflation. China’s Evergrande Group is selling a stake in its regional bank for about 10 billion yuan ($1.5 billion) as it offloads assets to address its debt crisis.

Brent oil dipped on Tuesday after topping $80 per barrel for the first time in nearly three years, as a five-day rally ran out of steam with investors locking in profits. US crude stockpiles unexpectedly rose last week following a strong start to the week in oil prices amid global energy crunch in natural gas.

Gold was bludgeoned again by the scythe of US yields on Tuesday amid relentless talk that the Federal Reserve will be pressured to raise rates sooner rather than later to arrest galloping inflation.

The board of the markets regulator Securities and Exchange Board of India (SEBI) took a number of key decisions including detailing a framework for spot gold trading, tightening norms for related party transactions, easing rules for issuance of shares with superior voting rights in tech companies and delisting norms.

The Mumbai Bench of the National Company Law Tribunal (NCLT) on September 28 passed an order, inter-alia, allowing the Future Group permission to meet with its shareholders and creditors for the purpose of seeking approval for the sale of its assets to Reliance Retail Ltd.

The NCLT rejected the intervention application filed by Amazon on the Reliance-Future deal. “The order was pronounced in open court today and a copy thereof is awaited,” the Future Group said in a statement.

Market regulator Sebi has tightened the regulations linked to related party transactions or RPT’s in India Inc, a thorny issue for several domestic investors. The decision was taken post a board meet held on 28th September and the new regime will come into force with effect from April 1st 2022, unless specified otherwise in the fineprint.

In layman terms, a related party transaction is a transaction which takes place between two parties who hold a pre-existing connection prior to the transaction.