Basically, there are two types of corruption. There can be good corruption and bad corruption. In China, the state controls all resources. But the private sector could see higher growth if it uses these resources. So, corruption in China is adopted to free the resources from the state and thus accelerate growth. In India, these resources are already with people. But you need the permission of a government official or somebody to utilise them. So, the government officials hold something back in expectation of money. He gets a bribe by stopping something. Thus, this type of corruption impedes growth.

--Yukon Huang Senior Fellow, Asia Program, Carnegie Endowment for International Peace -- -- The lines above are summarised from Dr. Huang’s talk at this here and elsewhere (view from timeline 18:27 to 22:00).

Despite its talk about ease of doing business in this country, India’s laws on mining are beginning to resemble a direct copy and paste from the rules the British created. Britain wanted to ensure that no Indian should become a wealth generator. So, among other things, they created a law which empowered provincial governments to refuse to grant of a prospecting licence or even to put up the mining rights for sale by auction. Fast forward to today, and you can see history repeating itself. Graft and power are great incentives for justifying even colonial culture.

And nowhere is this curse more devastating than in the gold mining sector. India is not among the leading gold producers in the world (see chart). But that is not because it does not have gold. It is because India has created laws that make the discovery and processing of gold well-nigh impossible.

We tinker with rules

This is because India’s policy makers believe that all natural resources belong to the government once the plot has been notified, and not the person who owns that plot of land. And he cannot exploit these discoveries till he gets government permission to do so. And for each clearance there is a price tag – both official and otherwise – that is attached.

The government now wants to close even the little window of opportunity that the private prospector has peeked through till now. It wants to repeal Section 10A(2)(B) of the Mines and Minerals (Development and Regulation) Act of 1957 (as modified till 2015). Earlier, the prospector could reconnaissance, prospect and mine areas that had not been notified by the government. This was allowed on a first come first served basis (FCFS). The finer was the keeper,

A year ago, the industry was riled with press reports that the “Government of India intends to repeal Section 10A(2)(B) from the MMDR Act of 1957”. This is what RK Sharma, Secretary General of FIMI (Federation of Indian Mineral Industries) writes through a letter dated 13 July 2020 from to the Secretary Ministry of Mines, New Delhi. The letter also pointed out that the repealing of this provision could affect the creation of some 432,000 jobs!

Obviously, the capriciousness of bureaucrats can be extremely vexing. That is why miners are livid. If the rule is amended, even if a farmer discovers gold dust on his farm which is not a notified area, he would be advised to keep quiet about it, and (if he can) extract the gold slyly for himself from that dust. If he lets anyone know, and if government officials come to learn about it, he could lose both his land and his gold.

The mining industry has been begging the government to continue to allow the FCFS principle in gold (or precious metal) mining.

Such a move would allow geologists to then work out a pact with local farmers and landowners and then begin identifying the veins that contain gold, and then extract gold. Since geologists also understand soil characteristics much better than most farmers, they could help the farming community grow crops more effectively on these lands, improving agricultural yield as well.

The government also wants to make the auction route compulsory for every field in which there is a possibility of gold being found.

Government officials refuse the see the absurdity of such a law. As pointed out earlier, gold mining is a highly risky proposition. The success rate of discovery is just 1 in 400 to 1 in 800 prospects. Second, as pointed out in a subsequent article, most of the identified locations have very little gold, thus unsuitable for large scale mining operations. Yet, the gold can be extracted profitably if one works with the local community. 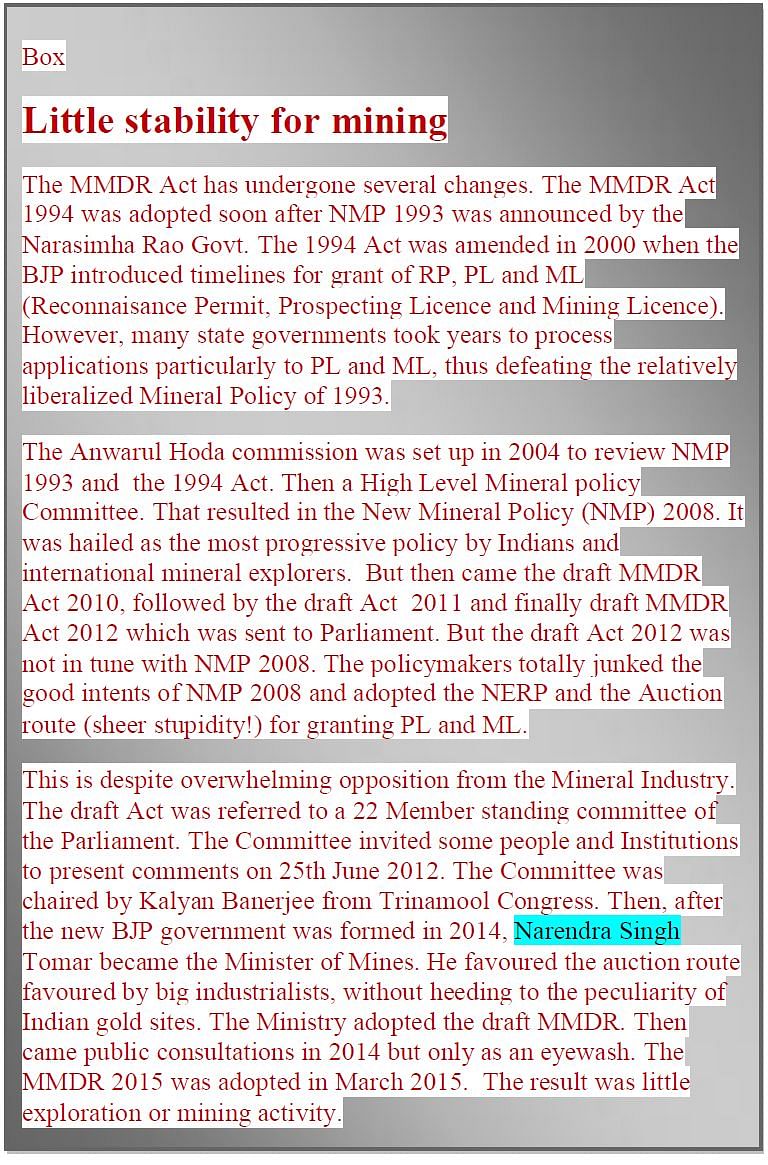 Sadly, bureaucrats fail to realise that nobody would want to pay for a licence when the chances of finding gold is just one in 800? It just does not make sense. Thus, the government has actually shot itself in the foot, by ensuring that no further prospecting takes place. The beneficiaries will be moneybag industrialists who can afford to be reckless with their money for licences and bribes. Other countries will also benefit as they can now sell gold to India. Through these insane laws, the government has ensured that India will never come on the list of countries with gold reserves worth mentioning (see chart).

To add salt to the wounds, the government wants to ban transfer of mining rights to anyone except through an auction. This too is an absurd demand because a farmer may co-opt a geologist, and unable to bear further mining expenses, may bring in another investor to whom majority shares of the mining venture may be sold.

This is the way gold mining grew anywhere in the world – in the legendary gold rush of the US, in Australia and in South Africa. India obviously believes it can march to a different drum! The irony is that Indian geologists are developing more mines in Zambia and Congo and elsewhere than in India.

Finally, on 24 August 2020, as in in deference to the objections raised by the mining industry, the Ministry of mines issued a circular seeking public opinion. Yet, in a bizarre move, on 21 December, even before the opinions from the public could be understood and addressed, the government announced the formation of new venture between two government owned companies --NMDC Limited and Mineral Exploration Corporation Limited (MECL). They are supposed to collaborate and conduct exploration in mutually agreed projects for iron ore, gold, coal, diamond, and other minerals in various states.

According to media reports, spokespersons for the government said that this would “help to establish resources/ reserves of various minerals / ores and its extraction while identifying unexplored mining areas. This will support the GOI’s ‘Atmanirbhar Bharat Abhiyan’ initiative and extending commitment towards mineral security for the nation.”

That is a laughable claim at best for three reasons. 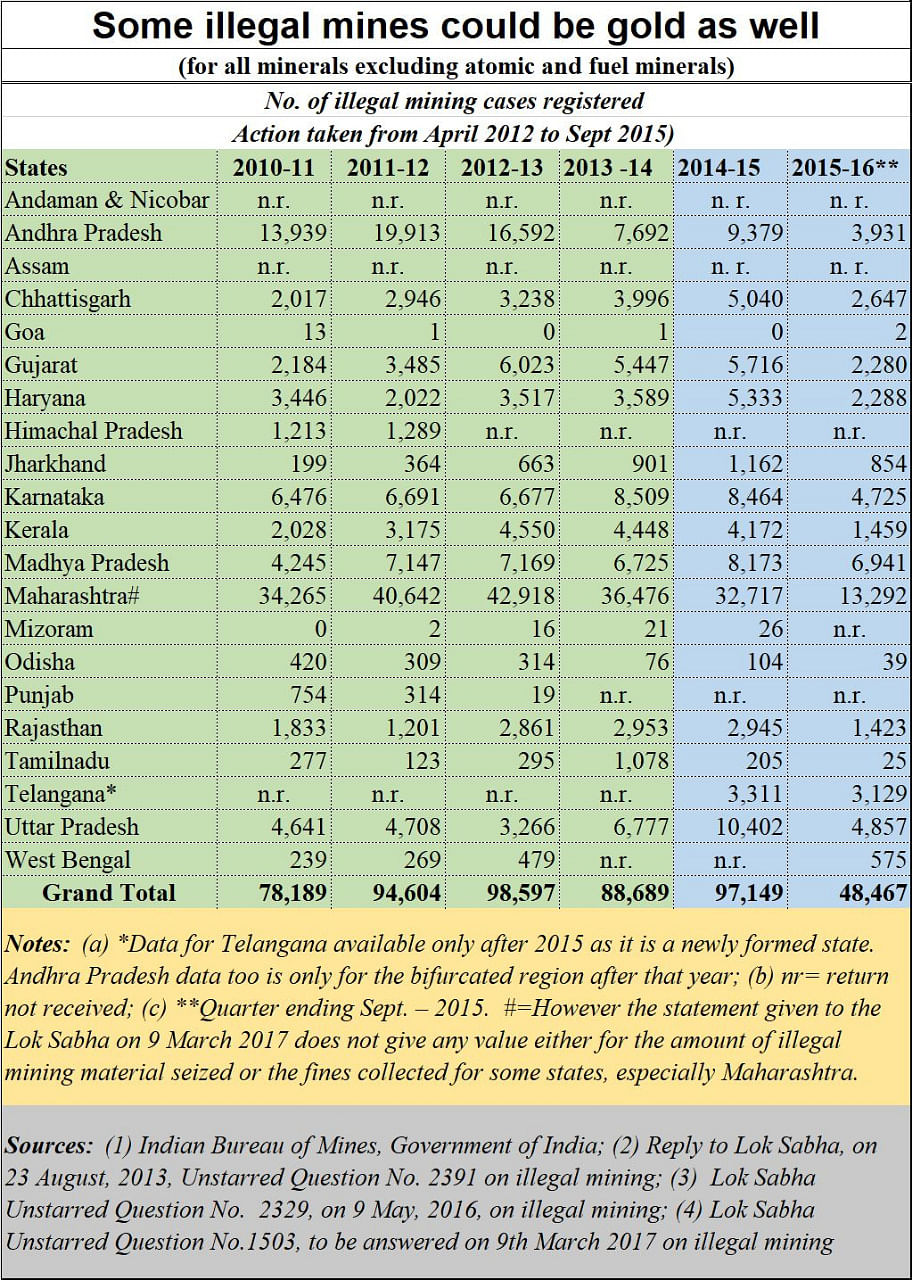 First, the government claim overlooks the hundreds of crore of rupees that have already been ‘wasted’ by the government since 1970 while drilling in Rajasthan which has around 240 tonnes of gold reserves. Drilling is still going on. Many private parties have lost money too (the market is full of stories about how the Baldota family lost around 100 crore). In all, some Rs. 700 crore of gold prospectors is reported to have gone down the drain.

This time, the government will pour more of taxpayers’ money down a bottomless hole. It should instead be transferring the risk to private (and eminently qualified) private players (more on this later).

The government thus becomes a dog in the manger – unable to find gold itself and unwilling to permit others from mining these locations.

Second, the government claim ignores the increasing incidence of illegal mining – some of it could be for precious metals along banks of rivers or in forest regions (see chart). As pointed out by this author earlier, much of the Naxalite funding comes indirectly from these illegal miners, who do not want roads, schools or police stations in the vicinity. It is easy for them to appoint people to convince (naïve) tribals that outsiders wish to poach their lands.

Both greed and protection of land ownership have thus promoted illegal miners, a menace that appears to have grown even after 2014 when the new government came to power. Unfortunately, however, little data on illegal mining is now available, either because the government does not want it known, or because access to information given out in the Lok Sabha or the Rajya Sabha has become increasingly vexatious to access. But it would be reasonable to assume that the instances of illegal mining have continued to soar even thereafter. It is one of the easiest ways of make money – much of it slush in nature. 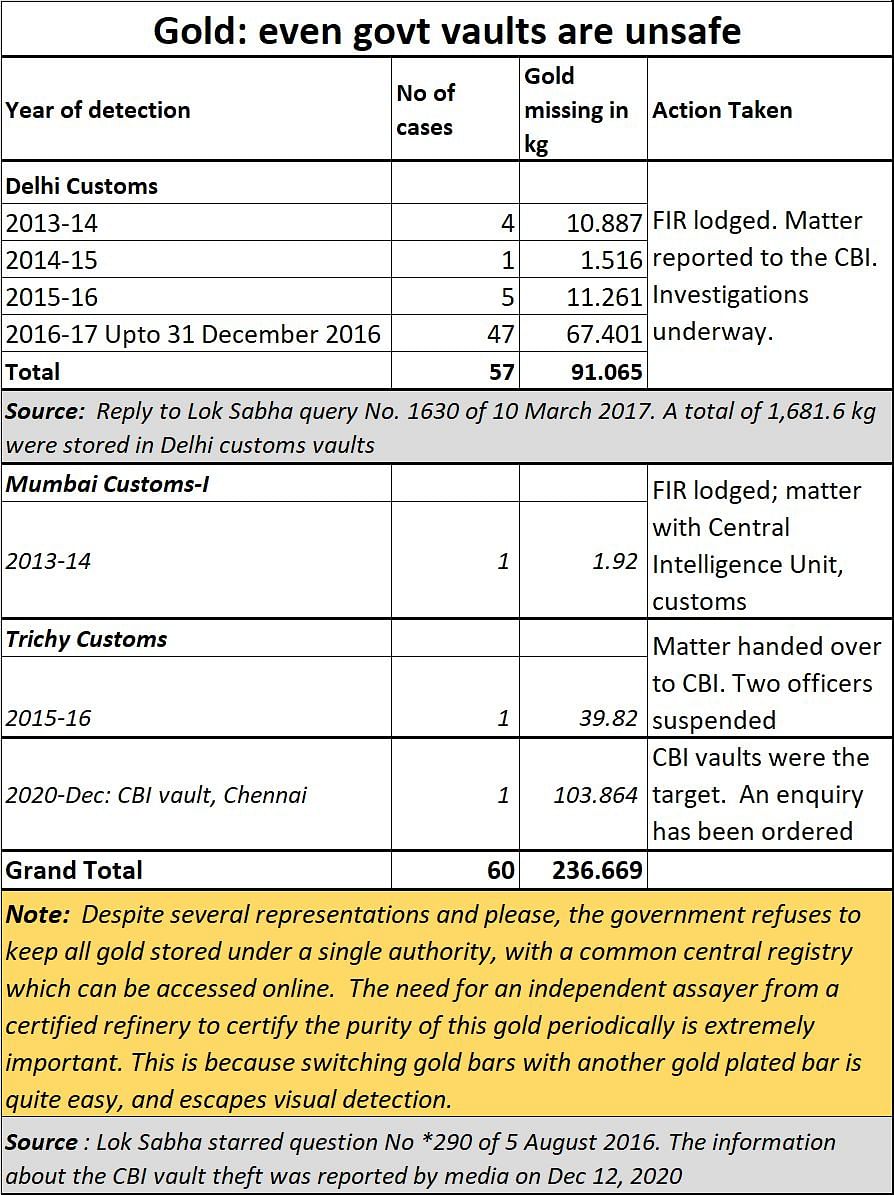 Third, almost every move of the government has resulted in theft, especially when it comes to gold. Watch how, even the the government’s megaphones – which earlier highlighted the smuggling of 25 kg of gold in Kerala – suddenly went silent. This was because media discovered the theft of almost 104 kg of gold from the CBI’s own vaults.

The fact is that gold has always been stolen – for decades -- from under the very nose of the government. And this does not include theft of gold from temple trusts under government administration ().

These are certainly not steps towards Atma Nirbharta, or Make in India or even ease of doing business. It is quite the opposite of the original war cry of this government – less government; more governance. Both parts of the war cry are belied.

The bureaucrat’s ability to play dog in the manger is legendary.

We listen to nobody

It refuses to vest powers relating to gold to an independent regulatory authority. That at least would create institutional expertise on how to promote and manage the gold business – right from mining to export. Not that government committees have not recommended this.

Take for instance the advice of the erstwhile Planning Commission’s document of 4th November 2011, para 6.1. It, like the RBI’s KUB Rao Report had recommended the need for a separate regulator for gold. A similar pitch was made in March 2018 by the High-level Committee chaired by Ratan P. Watal, Principal Adviser, NITI Aayog. But is the government even listening?

Someone should alert the government about the potential loss of foreign exchange earning thanks to this myopic and misguided view of its oficials. According to data that FIMI and the geologists have compiled for 2016, almost US$ 2.166 billion was the domestic capital outflow for 26 mineral related deals. The figure is bound to be considerably higher by now. But more on that next week).