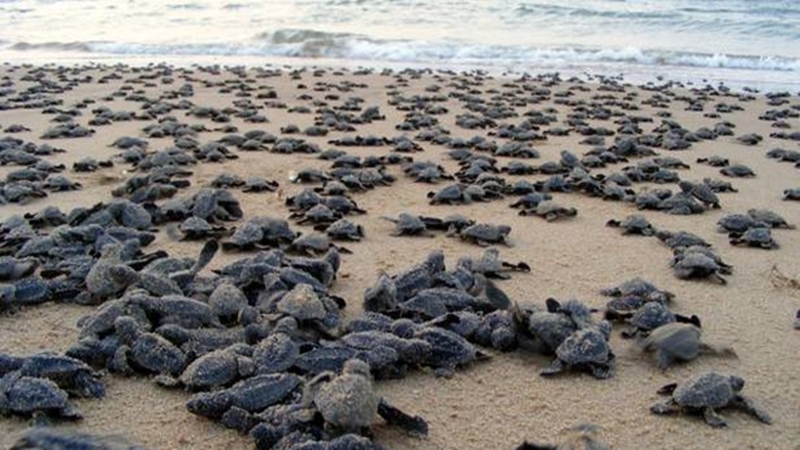 Thousands of traditional fishermen, including persons involved in fishing, selling and boat mechanics become jobless for seven months every year from November 1 during the conservation of the Olive Ridley turtles, the endangered species which visit in millions every year for mass nesting to the state. |

Traditional fishermen living along the coast of Odisha have demanded enhancement of their livelihood support assistance to Rs 10,000 per month during the seven-month fishing ban period for conservation of the Olive Ridley turtles, the endangered species which visit in millions every year for mass nesting to the state.

The state government was providing Rs 7,500 one-time support to the limited fishermen families in the state at present for the purpose since 2018, after revising its earlier assistance of Rs 5,000.

The fishermen and the trawler associations also demanded to reduce the ban period from seven to five months, as the Olive ridley turtles were coming near the coast from January. ''We demanded the ban should be imposed from January 1 to May 31 with limited areas,'' he said.

Thousands of traditional fishermen, including persons involved in fishing, selling and boat mechanics become jobless for seven months every year from November 1. ''We want all the families, who depend on fishing and its related activities, to be covered in the livelihood support of the government'', he said.

Presently, the government provide assistance to only 14,178 fishermen families in four districts - Ganjam, Puri, Jagatsinghpur and Kenrapara, who were only involved in fishing activities. ''We want their number to be increased to at least 20,000,” he said.

The general secretary of OTFWU said they have presented the demands in the high-level meeting held recently by the government for protection of the Olive ridley turtles, who visit the coast for mass nesting every year.

The government imposed the seven-month ban on fishing in around 120-km coastal areas in Gahirmatha and three river mouths - Rushikulya, Devi and Dharmara from November 1, 2021 to May 31, 2022, to protect the Olive ridleys. Any fishing in the no fishing zone - 20-km away from the coast through mechanized boats trawlers would be banned in the area during the period, said deputy director of fisheries (marine) Basant Das.

Fishermen also demanded to reduce the area of 20-km to 5-km from the coast as the no fishing zone, as the turtles generally congregate very near to the coast.