The Stoke Park Mansion in 1908. ‘Pa’ Jackson instantly realised it was the perfect setting for his vision of a country club.
Advertisement

This is an iconic private sporting and leisure estate in Stoke Poges, Buckinghamshire. It is the United Kingdom’s first club. In the case of the mansion building, it was designed in 1788 by an English architect James Wyatt.

The history behind this property makes it an iconic club...

History of Stoke Poges where Stoke Park Club is located

- According to a local historian Lionel Rigby, the earliest known owner of the manor of Stoke and Ditton (Stoke Park estate) was Siret the Saxon, vassal of King Harold.

- After the Norman Conquest at the end of the 11th century, Siret was forced out of the manor and William Fitz Ansculf from Picardy was granted a tenancy.

- 1750 is considered as a key date in the development of Stoke Park, stated the club’s website. However, the history of the Stoke Park estate dates back to the Domesday Book (book was completed in 1086). In 1813, the owner of what was then called the Mansion House (the present Stoke Park Club) and the Manor House wrote what he called an historical and descriptive account of Stoke Poges.

- Henry Hastings, the 3rd Earl, had to sell the property in 1581 to the Crown, due to hardship. He was the last person to inherit Stoke Park in a line of descent that had continued for 515 years since 1066, the year when his ancestors had forced the Saxon prince Siret from his lands.

- The estate was used as private property until 1908. It was turned into the UK's first country club by Nick Lane Jackson, founder of the Corinthian Sporting Club (Corinthian Football Club). He was fondly known as Pa.

- In 1957, Mobbs sold Stoke Park Club to the Eton Rural District Council and two years after he died in Bournemouth in 1959.

- In August 1988, IHG (International Hospitals Group Ltd), who had already been renting offices in the Mansion since 1984, bought a long lease on 215 acres of Stoke Park’s original estate. This purchase was made through its subsidiary, Stoke Park Limited (SPL). 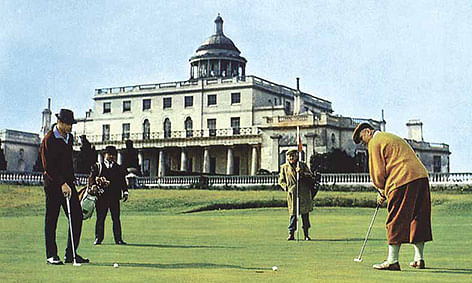 - Not to forget, Bridget Jones’s Diary (2001) was also filmed in the Great Hall, Lakes and The Pennsylvania Suite with Hugh Grant, Renée Zellweger and Colin Firth.

These are some of the films that were shot in this iconic place.