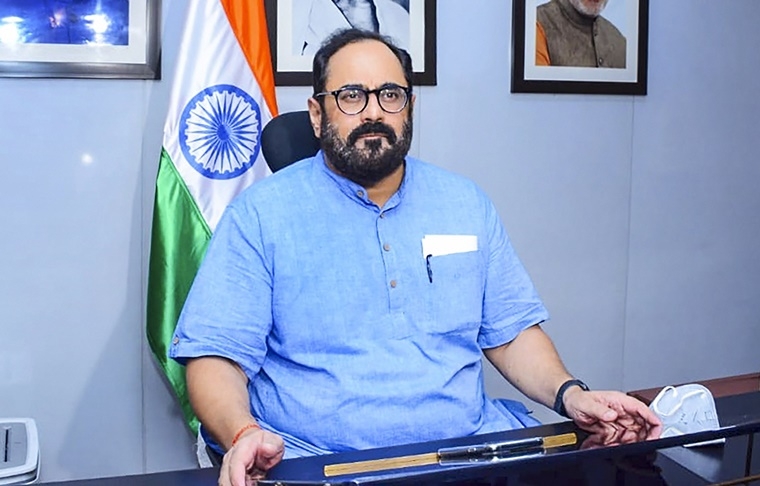 Addressing at the seventh edition of the 'Google for India' virtual event, Chandrasekhar said that the collaboration is a great example of how government and industry can work together to promote the growth of local businesses./ Representational image | Photo Credit: PTI

Union Minister of State for IT Rajeev Chandrasekhar is inviting Google to further help India realise its $1 trillion digital economy goal by 2025.

The collaboration between the government and Sundar Pichai-run Google will help Indian startups emerge stronger in the new normal during the pandemic.

Addressing at the seventh edition of the 'Google for India' virtual event, Chandrasekhar said that the collaboration is a great example of how government and industry can work together to promote the growth of local businesses.

"I'm hopeful and confident that Google's mentorship through this initiative will help selected startups emerge stronger in this new normal. I would like to invite Google and the rest of the industry to participate in India's $1 trillion digital economy mission, which will pave the way for the rest of the world," he added.

Google in July last year announced to invest about Rs 75,000 crore ($10 billion) in India in the next five to seven years.

The minister said that India is on track to attain new heights of digital empowerment under Prime Minister Narendra Modi's vision of Digital India.

"We have formulated the vision to make India a $1 trillion digital economy by 2025. Our priority is to improve the nation's connectivity and make India the largest connected nation by bringing all citizens online in an open, safe, trusted and accountable internet era," Chandrasekhar said.

"Last year, when Google announced its plans to invest $10 billion in India with a goal to fast-track, assist and be a partner in India's digital transformation, the government welcomed Google's contributions not just with the investments but also with their technology and platforms to accelerate the digital adoption. This relationship makes our 'Digital India' story one of empowerment and inclusion," Chandrasekhar noted.

Union Education Minister Dharmendra Pradhan said at the event that with the digital economy's potential to add millions of jobs, the government is committed to providing Indians every opportunity to upskill.

"It is heartening to see Google Career Certificates provide training in digital skills and launch an employer consortium to facilitate employment. If every Indian citizen has access to digital skills, it will not be long before India becomes a one trillion-dollar digital economy," he said.