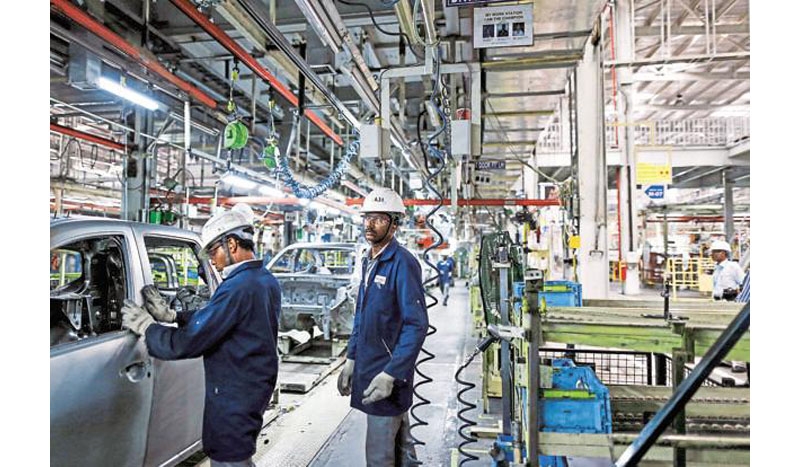 New Delhi: Signs of slowdown became more pronounced as the government data on Friday revealed factory output shrank by 1.1 per cent in August, recording the poorest performance in seven years due to a sharp decline in production of capital goods and consumer durable.

Industrial production growth for the first time in more than two years has treaded into negative territory.

The manufacturing sector, which contributes over 77 per cent to the IIP, contracted by 1.2 per cent, the lowest in five years, as against a growth of 5.2 per cent in the year-ago month, according to the data released by the National Statistical Office (NSO).

The previous low in the manufacturing segment was recorded at (-) 1.8 per cent in October 2014.

The data revealed that electricity generation growth too was in negative at (-) 0.9 per cent as against an expansion of 7.6 per cent in the year-ago month while the mining sector growth was flat at 0.1 per cent.

Earlier this month, the RBI revised downwards its GDP growth forecast for the current fiscal to 6.1 per cent from the previous estimate of 6.9 per cent after the first-quarter economic growth slipped to over six-year low of 5 per cent.

Providing further details of the IIP, the NSO data showed the worst performance came from the capital goods segment as its output shrank by over 21 per cent as against an expansion of 10.3 per cent in August last year.

Another poor performing segment was infrastructure/ construction goods. It showed a decline of 4.5 per cent in August 2019 as against a growth of 8 per cent in the corresponding month of last year.

'Intermediate goods' sector, however, showed a healthy growth of 7 per cent, up from 2.9 per cent in the year-ago month. Consumer non-durables segment posted an expansion of 4.1 per cent in August. This compares with 6.5 per cent expansion in August 2018.

In terms of industries, 15 out of the 23 industry groups in the manufacturing sector have shown negative growth during August 2019 as compared to the corresponding month of the previous year.

Commenting on the IIP numbers, K Joseph Thomas, Head Research, Emkay Wealth Management said the data amply reflects the underlying weakness in manufacturing and industrial activity which needs to be addressed without much loss of time for economic recovery.

Aditi Nayar, Vice President, Principal Economist there is a growing likelihood that the GDP growth may not meaningfully accelerate in the second quarter of the current fiscal from the multi-quarter low 5 per cent recorded in April-June quarter, despite a favourable base effect.

The extent of pickup in consumption in the festive months and crop production in the rabi season will signal whether a material turnaround in demand and economic growth are in the offing, she said.

Moody's Investors Service on Thursday slashed its 2019-20 GDP growth forecast for India to 5.8 per cent from 6.2 per cent earlier, saying the economy was experiencing a pronounced slowdown.

Meanwhile, the NSO revised upwards the IIP growth for July to 4.6 per cent from the earlier estimate of 4.3 per cent.