Electric train in UP begins from Gorakhpur to Nautanwa 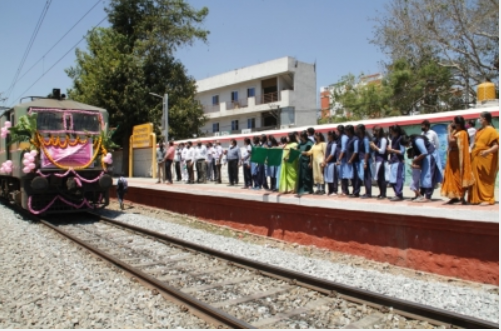 With the introduction of the first electric train, it will make the transportation of goods to Nepal easier. \ Representative Image |

"The preparations were made on Saturday after inspection and approval of the Commissioner of Railway Safety, and on Thursday the first electric train 05105 Chhapra-Nautanwa Intercity left Gorakhpur railway station for Nautanwa railway station at 10.30 am," he added.

The electric train will run on daily basis. Weekly express train Durg-Nautanwa Express (082201) through Bhatni, Varanasi and Prayagraj left for Nautanwa at 8 pm on Thursday. Another weekly train Durg-Nautanwa express will depart from Gorakhpur on Friday through Mankapur and Ayodhya.

"A total of three trains -- one daily and two weeklies, will now run between Gorakhpur and Nautanwa. With electrification of the railway track, time and money would be saved. The efficiency of the trains will be increased and the electrification of the 42-km track between Gorakhpur and Anand Nagar station has already been completed," the CPRO said.

With the introduction of the first electric train, it will make the transportation of goods to Nepal easier. The electrification work on the Anand Nagar-Badni-Gonda route is also expected to be completed by March 2022.