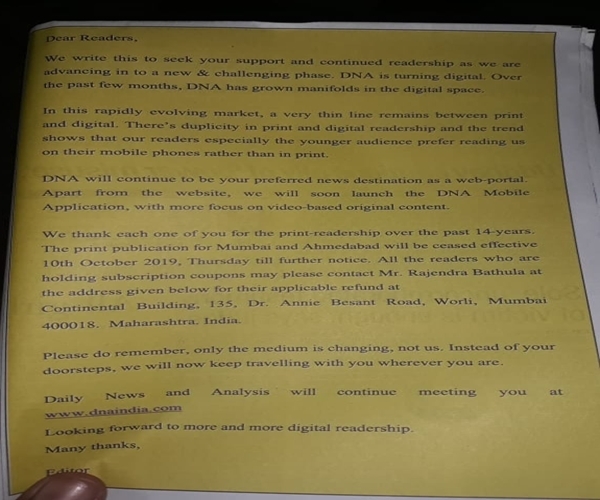 Mumbai: Amidst the liquidity crunch the parent Zee Group faces and staggered closure, its print venture, the Daily News & Analysis (DNA) on Wednesday said it is stopping print edition from Thursday and will go digital, citing changing reader preferences.

The last edition of the 14-year-old morninger, which had already stopped from Delhi and other centres earlier, will come out on Thursday from Mumbai and Ahmedabad, the broadsheet owned by Zee Group's Subhash Chandra's Essel Group said.

The Chandra family is going through financial difficulties as some its business bets have gone awry and the liquidity crisis made it difficult to refinance debt. They are selling their promoter holding--over 90 percent of it is pledged--to repay lenders.

The group still owes around Rs 7,000 crore to lenders after repaying over Rs 6,500 crore since March.

"In this rapidly evolving market, a very thin line remains between the print and digital. There's duplicity in print and digital readership and the trend shows that our readers, especially the youngsters, prefer reading on their mobiles rather than in print. Only the medium is changing, not us," a front-page note by the editor said.

The note said DNA is turning digital and sought reader's support in the "new and challenging phase".

The announcement comes at a time when globally many media brands are retreating from the print side like the popular magazine Newsweek or tweaking their strategies for convergent media.

The DNA began from Mumbai in July 2005, when the rising ad-spends amid a boom in economic growth had led to entry of many new players in the financial capital.

The Hindustan Times had launched its city edition the same month, while the market leader Times of India's had introduced a tabloid, The Mumbai Mirror, just a few months before. The HT group also launched a new business daily-The Mint with multiple editions since 2007.

The DNA said it will continue as a web-portal and it is also planning to soon launch a mobile application which will focus more on delivering video-based original content.

Readers having long term subscriptions can get a refund, the note said.

There have been many exits from the newsroom in recent past, but there was no word on the staff at the newspaper and how they will be accommodated. The management was scheduled to have a townhall meeting during the day.

The DNA is the third paper to be closed in 2019 alone.

While the Deccan Chronicle Group-owned Financial Chronicle was shuttered earlier this year and merged with the parent's English broadsheet, Mukesh Ambani had made a fry-in-the-pan entry into the print with First Post in January but chose to wind up within six months.

The city-based eveninger Afternoon was also shut earlier in the month.