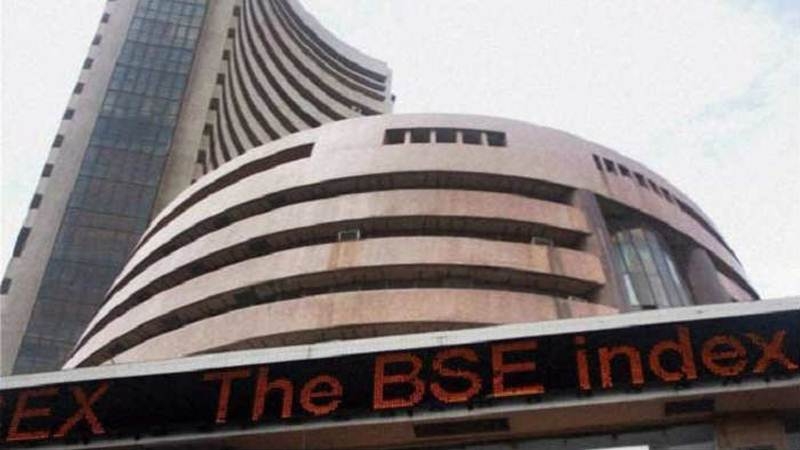 L&T was the top gainer in the Sensex pack, rising around 3 per cent, followed by HUL, Tech Mahindra, HCL Tech, Reliance Industries and Nestle India./Representative image |

The Sensex turned choppy after rallying past the 62,000-mark in the opening trade on Tuesday as investors booked profits at higher levels.

L&T was the top gainer in the Sensex pack, rising around 3 per cent, followed by HUL, Tech Mahindra, HCL Tech, Reliance Industries and Nestle India.

On the other hand, ITC, UltraTech Cement, Titan, Dr Reddy's and PowerGrid were among the laggards.

When the market opened for trading on October 19, the benchmark indices opened at new record highs on Dalal Street on Tuesday (October 19).

On October 18, Nifty closed higher for the seventh consecutive session on aided by Metal and IT stocks. This is the longest winning streak from NSE Nifty 50 index since August 31. At close Nifty was up 0.75 percent or 138 points at 18476.6.

Nifty rose on very high volumes. Advance decline ratio closed in the positive towards the day end but was lower than the morning levels. Nifty is now overbought on daily charts. Tuesday is the eighth day in this uptrend and eight is also a fibonacci number that could denote a change in trend for the near term. 18,600 on the Nifty is anyways a resistance while 18,350 is a support, said Deepak Jasani, Head-Retail Research, HDFC Securities.

US stocks shake off early losses on Monday

US stocks shook off early losses to finish mostly higher Monday, with buying in consumer discretionary and information technology helping to buttress the broader market, despite a report that revealed slower-than-forecast growth in China that was blamed for early weakness.

In economic reports, a reading of U.S. industrial output was down 1.3 percent in September. The reading for August was revised lower to a decline of 0.1 percent from a gain of 0.4 percent.

The country's exports rose by 40.5 percent to $15.13 billion during October 1-14 on account of healthy performance by key sectors such as petroleum products, engineering and chemicals, according to preliminary data of the commerce ministry. Imports during the period grew by 60.72 percent to $14.82 billion, the data showed.

India's merchandise exports grew by 22.63 percent year-on-year to $33.79 billion in September on better performance by key sectors, even as the trade deficit widened to a record high of $22.59 billion. Export sectors which are recording positive growth include coffee, cashew, petroleum products, handloom, engineering, chemicals, man-made yarn/fabrics, gems and jewellery, plastic and marine products.

Swedish car brand Volvo said Monday it was planning its Stockholm stock exchange debut on October 28, targeting a market value of up to 200 billion kronor ($23.1 billion, 19.9 billion euros). The Swedish carmaker first announced its plans to go public in early October, while noting that China's Geely would remain the largest shareholder.

The expected share price would be between 53 and 68 kronor per share, "corresponding to a market capitalisationof Volvo Cars of 163–200 billion kronor after completion," the company said in a statement.