The prices have risen by 81% in the last one month. In a written reply to Rajya Sabha, Minister of State for Food and Consumer Affairs
Agencies 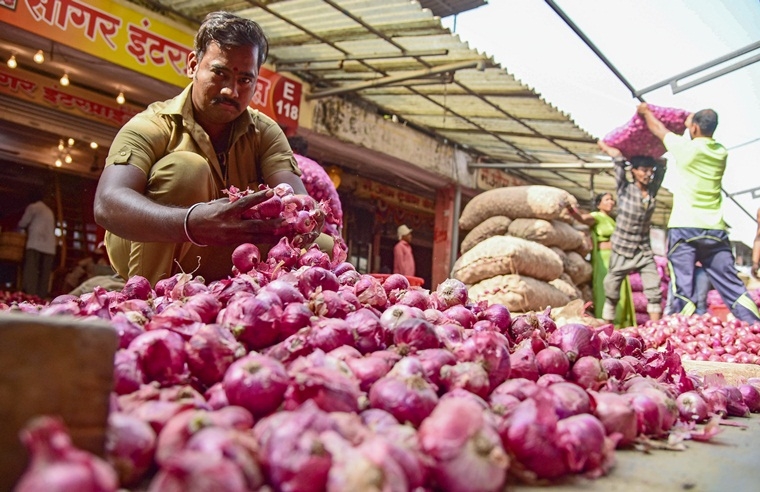 New Delhi: Average onion prices across major cities have jumped five fold in the last one year to Rs 101.35 per kg as domestic production in Kharif and late-kharif seasons (summer-sown) is estimated to have declined by 22%, the government said in Rajya Sabha on Friday.

The prices have risen by 81% in the last one month.In a written reply to Rajya Sabha, Minister of State for Food and Consumer Affairs Danve Raosaheb Dadarao informed that all-India daily average retail price stood at Rs 101.35 per kg on Tuesday (December 10) as against Rs 55.95 per kg a month-ago and Rs 19.69 per kg a year-ago.

"The combined Kharif and late-Kharif production for 2019-20 is estimated at 54.73 lakh tonnes as against 69.91 lakh tonnes in 2018-19," he said, Onion is a seasonal crop with harvesting period of Rabi (March to June), Kharif (October to December) and late Kharif (January to March). In the intervening period (July to October), the market is fed by stored Rabi onions.

"During 2019-20, there was a three-four weeks delay in sowing as well as decline in sown area of the Kharif onion because of late arrival of monsoon.

Further, untimely prolonged rains in the major growing States of Karnataka, Maharashtra and Madhya Pradesh during the harvesting period, i.e., September/October, caused damage to the standing crops in these regions.

"All this adversely impacted production and quality of the Kharif crop. The rains during September/October also affected transportation of the crop from these regions to consuming areas.

This led to limited availability of Kharif onion in the market and put pressure on its prices," Dadarao said.

To boost domestic supply and control prices, the minister said several steps such as creation of onion buffer of about 57,373 tonnes during Rabi 2019, ban on exports since September 29, facilitation of import, imposition of stock limit on traders, approval for import on onion through MMTC and domestic procurement of onions from producing/surplus states by NAFED for supplies in deficit states.