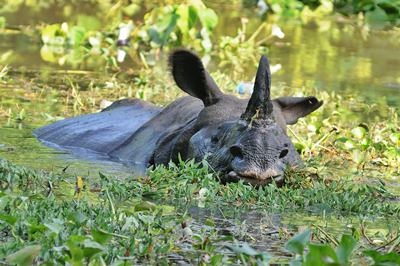 A prominent businessman from Assam’s Hojai, wanted in cases of illegal rhino horn trade, has surrendered before forest officials in Golaghat district.

Md Rahimuddin, who had two cases pertaining to unlawful trade of rhino horns registered against him, was absconding for a long time, Forest Department sources said.

He had managed to obtain pre-arrest bail in one case, but was arrested in connection with the other.

“As we closed the net around him, the suspect surrendered at Bokakhat on Sunday,” they said.

Meanwhile, a country-made gun and deer meat were recovered inside West Margherita Range of Dehing Patkai National Park in Tinsukia district by personnel from the department.

Following a tip-off regarding the presence of poachers inside the area, a search party was sent to apprehend them on Sunday, Divisional Forest Officer, Digboi, said.

The gang of poachers, however, jumped into the Dehing river and escaped.

An offence under the Wildlife Protection Act, 1972, has been registered by the West Margherita Range and an FIR under the Arms Act was filed with Margherita Police Station.

“Investigation is underway… Samples of the seized meat will be sent for forensic analysis,” the DFO added.