Highest attrition among developers from the Rainbow group

About 55 percent India Inc. recruiters struggle to find skilled developers from the LGBTQ+ work group and the attrition rate among this group is higher when compared to their male and female counterparts. Both these statistics indicate that the basic indices have moved when it comes to the career progression of queer developers at Indian tech workplaces.

Highest attrition among developers from the Rainbow group 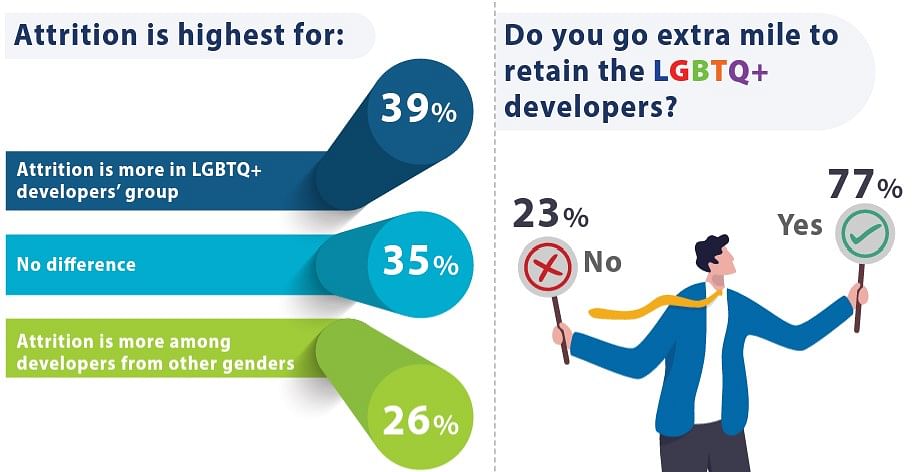 About 33 percent respondents found no difference in the attrition levels based on genders, and the remaining 26 percent said that more men and women developers tend to leave jobs more often than the LGBTQ+ developers.

77% tech firms go out of way to retain LGBTQ+ developers

The survey further probed if the tech companies were putting in extra efforts to retain developers from the queer group, and the unanimous answer was ‘yes’ with 77 percent votes. Only 23 percent respondents answered ‘no’ to this question.

When asked about the popular measures to retain developers from the LGBTQ+ group, company-sponsored upskilling opportunities (49 percent votes) emerged as the most popular offering by companies. Other popular retention tools were offering career growth chances (35 percent votes) and financial aid for wellbeing (16 percent votes).

The TechGig survey inquired about how active their firm’s queer support groups were, and most (55 percent) defined their groups as ‘very active, holding meetings and proceedings regularly’. About 35 percent said that their pride groups were inactive. The rest, 10 percent said that pride groups at their firm were moderately active, holding meetings and proceedings periodically.

TechGig - studied the hiring and employee engagement patterns for LGBTQ+ developers at tech companies. It surveyed 568 tech recruiters from India Inc. firms for the ‘Gender Diversity Survey 2022’. Among the respondents, most (69 percent) were working in the IT/Telecom sector.