HomeBusiness5 reasons that leave many unenthused about the Atma Nirbhar schemes

5 reasons that leave many unenthused about the Atma Nirbhar schemes

The Greeks once described man as the only living creature who can stand upright, lift his face to the stars and laugh. Jackals laugh too, but they don’t walk tall and lift their heads high. Human beings want to be proud of their achievements. And you don’t really need a government to tell people to be Atma Nirbhar (self-reliant), unless it is a tacit admission that all along governments did everything to crush the self-reliance of Indians.

The current slew of announcements by the government confirms such fears.

First, India is almost down on its knees. What it needs urgently are investments – from anywhere. And as much as is possible.

For perhaps the first time in its independent history, the country may see a negative GDP growth. Part of it was on account of the lockdown caused by the COVID-19 pandemic. But part of the economic disaster the country faces is on account of past policies – ranging from a poorly understood and misapplied demonetisation, a badly implemented GST and a confused approach to law and order itself. Hence investors are shying away from India.

Yes there are fables being told – of how rising labour costs will send investors in China scurrying to India. But a Normura study last year showed that only 3 of 56 companies leaving China came to India . Ditto with the fairytale that the global COVID-19-triggered move to shift logistics away from China will benefit India. Some – foolishly – suggested reserving parcels of land for potential investors. But as CNBC in Indonesia pointed out out on 11 May 2020, “Indonesia won the battle over Southeast Asian countries as a main destination for the relocation of US factories. Trump decided to relocate around 27 US factories from China to Indonesia.” Nobody has moved to India, as yet. So, whom are the policy makers gulling?

Nobody wants to come to India because it is difficult to do business here (though its ranking have improved since 2017. But what has not improved is its inability to enforce contracts. (see chart).

India even changes its business rules, after investors have put in their money. Look at the way the rules of business were changed for wholesale and online trade after Walmart and Amazon entered India. Everyone knows how telecom rules were changed. And now the government wants to disrupt the payment gateway, e-wallet, credit card and debit card markets by changing more rules. Worse, India discourages companies from opting for international arbitration .

Investors enter when their investments are safe and dispute resolution is effective (sadly, the government is the main litigant in half the disputes). Allocating Rs 21 lakh crore (see chart) will not remedy this flaw. It needs integrity and political will. Else the country will experience more pain, poverty and death. Dispute resolution is obviously the key. 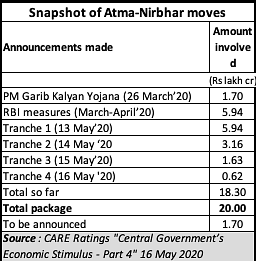 There are four other reasons why Atma Nirbhar does not impress many.

Take reason #2. Take the biggest allocation – for MSMEs – in Tranche 1. It allows MSMEs to borrow without collateral. This is what Indira Gandhi did in 1982 with her loan melas. Loans were given without collateral. Much of the money did not come back, as feared by prudent bankers. This will happen again. Moral: Don’t introduce schemes which tempt people to be corrupt. Instead give 2-5% of turnover as a grant to all MSMEs. The honest are then kept honest.

Third, an outlay of Rs.21 lakh crore has been announced. But half the amount relates to measures announced earlier. That, as economist Kaushik Basu has pointed out, is woefully inadequate.

Fourth, there is little audit. Normally, good governance demands that the larger the sums involved, the stronger should be the audit controls. Yet PM CARES (unlike the PM’s National disaster Relief and other funds) is not subject to CAG audit., That does not inspire confidence.

Lastly, there is little vision in the proposals. Nowhere is this more visible than in the proposals for agriculture (tranche 3). This is both surprising and immensely saddening. Agriculture remains the backbone of India where 50% of its population dwells. That is a huge purchasing power for a consumption economy. It is also a huge voting block. Moreover, as studies have shown, a rupee invested in agriculture goes a lot farther than if invested in industry. Yet there is no grand plan, no incentive for investment, no attempt to push agriculture up the value chain.

Instead the government has hobbled agriculture, especially milk, which is the most successful agricultural product. But the lack of vision and the lost opportunities in agriculture, education and healthcare will be grist for another article. The omissions are sad and horrifying.

This is the first of a three-part series on how Rs 20 lakh crore has been allocated. The author is consulting editor with FPJ