Never Marry a Woman with Big Feet: Women in Proverbs from Around the World by Mineke Schipper- Review 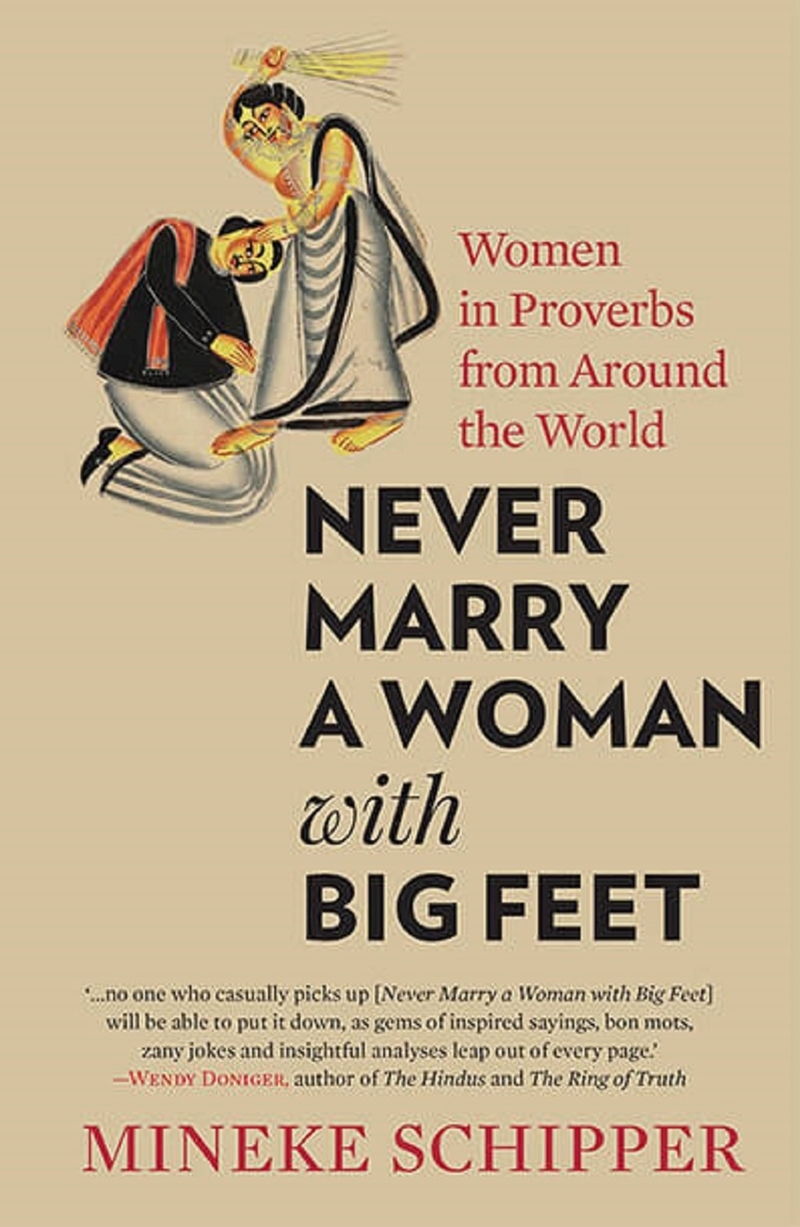 Our development since early childhood would show our stories liberally strewn with sayings and adages, maxims and axioms and wise saws, not to forget the inevitable truisms, platitudes…and clichés. Some learnt at the mother’s knee, others at the end of a stick – the latter of which was generally metaphorical. Thus, what Lord John Russell rightly called “the wit of one and the wisdom of many” became a kind of standard to live by, an easy prop in discussions on various subjects, and of course, a channel for advising future generations.

There have been numerous, serious studies and presentations on this smallest genre of literature. Wolfgang Mieder and Alan Dundes, in 1981, published a set of twenty essays on the proverb. Apparently, this book kindled a lot of interest in Paremeiography (collection of proverbs) and Paremeiology (study of proverbs). And one is driven to the conclusion that beyond the larger field of phraseology, proverbs have kept anthropologists, folklorists, linguists literary historians, psychologists and several more professionals avidly occupied.

The collection and study of proverbs is found as far back in history as the Sumerians, and later the Greeks and the Romans; let us not forget that the Bible brimming as it is with proverbs of various kinds, also has a Book of Proverbs; ancient Indian literature is a veritable treasure trove of wisdom – from, at least, the times of Vikramaditya (recall the wife of Varahamihir) and Thiruvalluvar. In the west, the names of Erasmus of Rotterdam with his Adagia and Otto Moll’s International Sprichwört Bibliographie stand out as the major works in compiling and commenting on proverbs handed down through the ages.

Some proverb collections are made for the tourist market, attempting to present the proverbial wisdom of the country or region; there is, however, a huge number of scholarly works by philologists, literary historians, anthropologists and social scientists, such as the book under review. While most of the works on proverbs have been on the etymological and philological aspects of the proverb, Mineke Schipper has chosen to collect and analyse the proverbs that over the millennia indicate the attitude of Man towards Woman. “Proverbs with their implicit generalised import are clearly a suitable and succinct form in which to verbalise socially prescribed actions and attitudes,” says Ruth Finnegan in her essay included in the Mieder and Dundes collection; in another place, she says that proverbs are often said to represent a people’s philosophy – a theme that reverberates through Schipper’s book.

If we look back at how it all began, says Schipper, we find that sex and gender issues have been expressed in oral traditions…Such oral ‘wisdom’ represents a fascinating cultural history, and proverbs are a most telling part of that serial narrative. Based, therefore, on research of proverbs from 245 languages, the author goes on to analyse them on the basis of the specific references to women in proverbs.

There is a chapter on proverbs which refer to women’s bodies as a whole, and each part; their beautification, ageing and death; their phases of life – from girl to bride, to wife/co-wife, from mother to mother-in-law, widow and grandmother; the joys and sorrows of love, sex and child-bearing; their work, their talents, and their power. The book refers to the female ideal – the talented, intelligent, powerful, defiant or occult woman. Men, in most societies, are seen as the ‘inexorable tyrants’, as well as insecure beings or easily-seduced-lovers while women are ‘lamentable victims’, and yet extremely powerful.

Interestingly, the author found that proverb on themes in one culture or country often exists in other regions: largely attributable to standard (gender-based) patterns in attribution of status and of roles. The reference to Big Feet, for instance, comes from a tribe of Malawi/ Mozambique, perhaps, a fear present as far away as China with its the foot-binding practices. Then there is another interesting question: How are we able to understand proverbs from all sorts of ‘foreign’ cultures?

At the end of it all, one has a very disturbing thought. Is misogyny or mistrust of the female of the species so universal? It is reflected even in the modern day wishful thinking: Would that we could fall into a woman’s arms without falling into her hands! Schipper laments that as much as women have been under-represented, women’s views are also under-represented – but later says it is likely that the silent majority of our foremothers have formally complied with the dominant social order. It is more likely that the views have been passed on unobtrusively down the centuries!

One agrees with Schipper though, when she says, “Conversation about proverbs is a wonderful experience. Everywhere people love it, and are fascinated because proverbs have to do with human existence.”