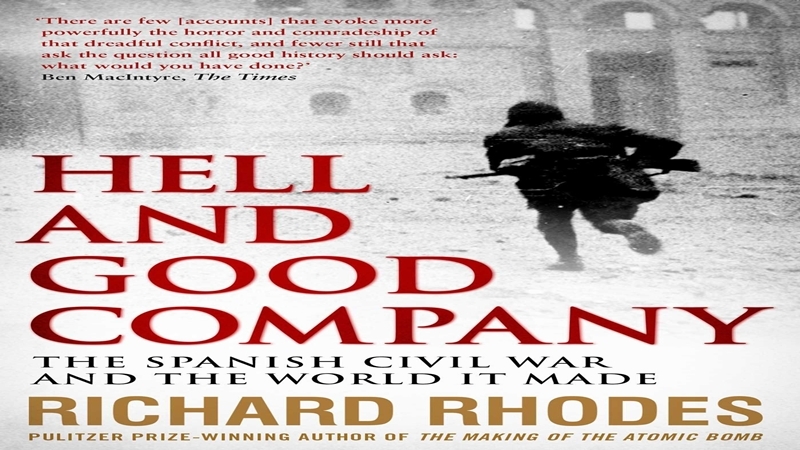 Rebellions, revolutions, Civil wars. Animal instincts of territorial marking with the blood of the “other dumb bastards”! Armed combat has never been known to be “civil” and in spite of the fact that the Spanish Civil War attracted some of the best minds of the time, it was an indescribably brutal conflict.

And if Rhodes’ Bibliography (21 pages in fine print) is any indication, the civil war in Spain attracted and continues to attract people of all callings as if a re-visit would salve the wounds, would assuage the grief, or would serve to pay homage to the thousands who gave their lives to the cause of humanity – and adventure.

It was a conflict between notions of fascism, communism and those opposed to it; between tyranny and freedom, democracy and totalitarianism – or whatever perceptions (ideological or political) people had of these ‘positions’: with concepts of “Christian civilisation” hovering precariously somewhere along the battle lines.

Britain and France dallied in semantics over the Republican Government and the Nationalist rebels while Hitler and Mussolini supplied the much required arms and ammunition to Franco. Historians, novelists and experts on armed conflicts may have their theories of the civil war and myriad writers have recorded them.

Very few think of the individual ‘soldier’ who as General Patton said: “sits beside a mass of goo that was your best friend’s face a moment ago”, the soldier who is at the wrong end of incendiary bombing. Bernard Shaw refers to this in a clean, drawing-room kind of way, when Captain Bluntschli in “Arms and The Man” speaks of crushed knees caused by horse-riders moving sideways rather than towards the enemy, while the aristocratic Saran off speaks of the glories of war.

Rhodes, the author of the book under review, moves in on the battle-worn ground, seeing the effect of the war on individual minds, and on their relationships. There are young lovers brought together by the war – and then torn apart. Muriel Rukeyser, the US journalist sent to cover the People’s Olympiad and Otto Boch, the Bavarian, with their “three days of lovemaking with no common language” is one; another one is poignant tale of the English nurse, Patience Darton, and the International Brigader, Robert Aaquist.

Ernest Hemingway was not far behind in his passionate affair with Martha Gellhorn… while Andre Malraux played his own role supplying planes to the government forces. Rhodes also speaks of the several developments which came out of the Spanish civil war. The aggressive use of aircraft and the concept of destruction of civilian areas with incendiary and other bombs were the conflict-supporting developments. Use of propaganda as part of the strategy was another aspect of this war; armoured vehicles came to be used.

The lesser known and yet a far more noble development was the methods of blood storage and transfusion that were almost perfected by the end of the civil war – for which the names of Oswald Robertson, Sergei Yudin, Norman Bethune and Frederic Duran Jordá need to be ever kept alive. But for all the sacrifices made by tens of thousands of people (not restricted to Spaniards), Franco ruled with an iron hand until his death in 1975.

“Red” or “white” the terror remained in the mutilated bodies and broken souls, the shattered relationships and naked disillusionment of the survivors and observers. Franco is believed to have executed over a hundred thousand Republican prisoners after the war – while several thousands died in concentration camps.

Rhodes concludes his Preface with the remark that the fire bombs came back to haunt Germany in WW-II … and the art, the literature, and the witness yet endure to move us to pity and to terror. Picasso’s “Guernica”, Hemingway’s “For Whom The Bell Tolls” and Orwell’s “Homage to Catalonia” are the better known pieces of this terrible episode of human history; many more were inspired by this un-human conflict, some lost in the ravages of the war, some preserved for posterity … “to pity” perhaps, but “terror”? There was no respite as humanity moved into WW-II with unprecedented methods of torture and humiliation, and then to Vietnam and Iraq and the modern-day conflicts that have led to the humongous flow of refugees into Europe. Rhodes however, ends the book on a more sombre note: “what survive are documents, paintings, methods, technologies – and … bones scattered across a peaceful field”.

He shows how the Spanish civil war, foreshadowing the Second World War, carried the fight far beyond the traditional battlefield, and revived the practice of torturing prisoners of war; how concentration camps for those who didn’t share beliefs became the norm over the next decade at least; and how the tag of “commie” entered the US psyche leading to incarceration of their citizens for indefinite periods.

Pitiable? Yes. Horror? Possibly. But no, not even the worst atrocities can strike “terror” in the human mind. “Hell and Good Company” (how the title has been selected is interesting!) is a passionate piece of writing that brings out the ground level miseries and joys of the fighting man (and woman), of the spirit that led them to the fight in the first place, the romance and the adventure that went with it, and the spirit that died with the war.