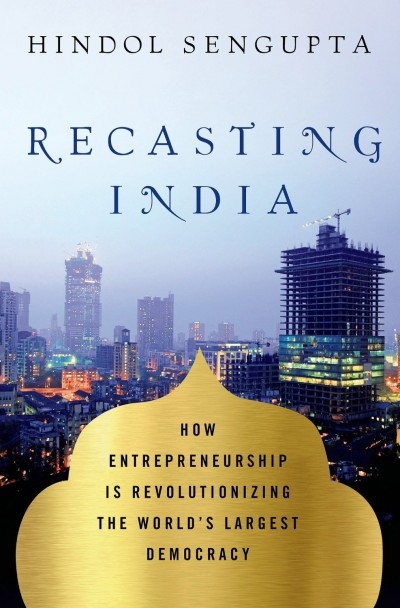 This book explains why the world’s largest democracy is at the risk of falling apart – and the surprising force that’s holding it together.

This brings to the fore the saga of the poor and those seeking to disseminate knowledge to the oppressed whose determination of enterprise and innovation despite all the odds in far flung areas of the country has raised hopes of a new dawn minus the religious and caste barriers. At least one of them has been invited by Harvard University to lecture on where, what and how despite the odds stacked against him did he make such a revolutionary breakthrough. In this instance it is benefitting women as well as removing age old taboos about menstruation.

Author and journalist Hindol Sengupta travels to different parts of the country to provide valuable insight about the things happening at the very bottom of the pyramid of society. In pursuit of his objective, Arunachalam Muruganantham has been ostracised by his own family – mother and wife – as well as the villagers who despised the man as being mad and demented. He remained steadfast till he succeeded what he set out to do despite the utter lack of resources.

The suppressed Dalits and some others shunned and left to do manual scavenging are surely but slowly beginning to be reprieved. This abhorring practice has been continuing for centuries despite the government banning it. The spirit of the aam aadmi is remarkable. That is why India is unlikely to have a cohesive spring of revolt. Already most people working in villages or small towns do not get their income from agriculture – only 40 per cent do. The rest have found work in everything from local retail to banking and small scale manufacturing.

Rural India is revolting and retailing at the same time. Some of the Indian states most affected by communal violence are also some of the fasting growing economies in the country. This is a war for, and not against, prosperity. When the poor get cash they spend in exactly the same way as us – on private education, or private health care and food, from subsistence levels to fruits and vegetables and meat. Many aam enterprises are tackling some of the most protracted problems of the Indian nation-state. They are moving India from a reactive state to a responsive one. India is becoming a nation of creators as well as consumers.

Prominent Dalit intellectual Chandra Bhan Prasad believes that the revolution has already come. Empowered by urban anonymity and commerce Dalits across India are tearing down centuries of bizarre and bloody repression. Since the economic liberation programme began in 1991, there has been a sea change in the ownership of consumer items like bicycle, fans, TVs, mobiles and living in concrete houses.

The instances of upper castes eating and drinking at Dalit homes once impossible to believe rose more than 70 per cent in the eastern Uttar Pradesh and 45 per cent in the western parts of the country’s most populous state. Entrepreneurship is steadily growing in J&K once considered the most dangerous place on earth. Cold storages have come up in the sensitive border state facilitating farmers to store their produce. Then there is Arifa Jan trying to revive Numdah, the 17th century rug making technique said to have been popularised by the Mughal emperor Akbar. Her father is a helper in the state transport department. Both her parents are illiterate.

In the aftermath of the 2002 riots in Gujarat, businessman Zafar Sareshwala’s mission in life was to get the then chief minister Narendra Modi arrested. Modi has since then become the country’s 15th Prime Minister and Sareshwala one of his close friends. It has taken a decade for the transformation driven by economics that lies at the heart of Modi’s campaign to become the country’s Head of Government.

A class IX school dropout Muruganantham was a workshop mechanic in a village near Coimbatore in Tamil Nadu who can well be the world’s most radical entrepreneur. He created a machine that can make some of the cheapest but good quality sanitary napkins. His machine for making sanitary pads have sold in 1300 locations in India and around the world including Nepal, Bangladesh, the Philiippines, Mauritius, Kenya, Nigeria, Ghana, South Africa, Mozambique and even America.

His vision is that in every part of the world, low cost sanitary napkins can be made and used until not a single woman anywhere in the globe is without a pad when she needs one. It is only by selling blood that he patented his machine. “I am not a woman. But trying to think like one has changed my life, and so I owe a debt to all women,” says Muruganantham.

Regrettably business has largely never been thought of as a part of the solution in this country. In a sense economic revolution is coming to India the way Mahatma Gandhi brought independence along with social change thus breaking many prejudices and walls. Not with violence and an uproar but by slowly chipping away at the problem through careful enterprise. It is going to be different kind of spring.

The benevolent state and mercenary private enterprise are enduring myths, neither absolutely true, in India even though the experience in the last decade shows that in most public services – private enterprise has made things cheaper, better and more accessible. This in no way denies the corruption, adulteration and exploitation. Where competition has been free and fair, usually the market has veered toward getting customers a better deal.

An ever demanding customer base has also pushed companies and entrepreneurs to think hard and innovatively about gaps in the market and services that could have been rendered. Who would have thought that a village man would spot the gap in the sanitary napkin market or that mobile phone based voice networks would emerge as a lifeline in the deepest tribal areas of India where the state has failed to deliver services for decades and in some areas for centuries.

It is not Hindol’s argument that private business can solve all of society’s problems – perhaps nowhere but most certainly not in India. The state has a role to play in ensuring justice, equity and democracy. But for too long the state has interfered and impeded the natural entrepreneurial prowess in India. To see this country as the land of slums or slumdog millionaires is the sort of extreme that makes for great headlines across the world.

But there is a vast middle India yearning for change, fighting for change, creating change idea by idea, innovation by innovation.  Business of all things, capitalism and not just politics has had such a transformative impact on Dalit life and caste in this country. Could anyone have believed that a company can be created for maids? Hindol found pockets of incredible enterprise and dexterity that is hardly talked out. Ordinary people are tackling the myriad contradictions of an aspiring country. A powerful moment of change is upon the teeming masses.